Though we’d been to Rome before (on our honeymoon) and seen the major sites, we didn’t plan anything in advance back then and weren’t willing to stand in line 2 hours for anything, cus we’re cool like that. Plus, this just gave us an excuse to come back to Rome one day.

Well, lo and behold – we did! We planned ahead this time and came to Rome… TWICE! Once to visit Vatican City (which, of course, we describe in detail below), and again in the not so distant future. I know you’re just DYING to know exactly when we returned and what we did, but you’ll just have to contain your excitement and wait patiently for the blog post.

Anyway, we had booked our Vatican tickets in advance, successfully bypassed the absurd lines, entered the premises and subsequently sighed with relief as neither of us spontaneously burst into flames. The start to a successful visit, we thought.

Spent about two hours wandering (and by wandering I mean forcibly moving at the incredibly slow pace of the insanely condensed crowd) the Vatican Museums. We took about 300 photos of paintings, sculptures, and architecture and honestly, going through and selecting which to put up and then including descriptions is just way too much work. So we tried to keep this as short as possible with a few highlights we wanted to focus on. We’ll start with the cool view of St. Peter’s Basilica seen from the Vatican gardens:

THIS turtle gets along swimmingly (see what I did there?) with animals of all breeds, shapes and sizes: 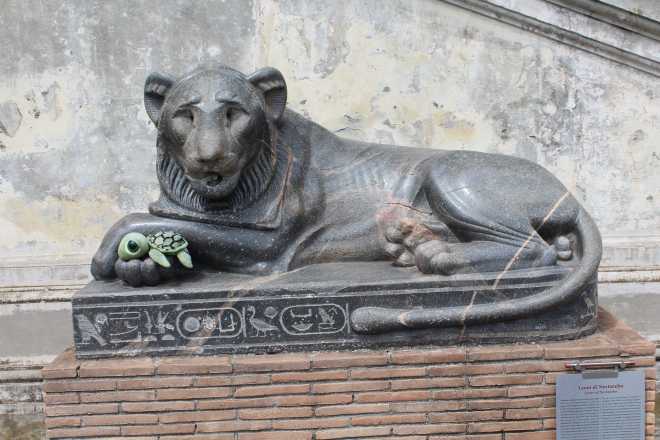 The globe could spin!! (as this chick was demonstrating for her tour group) 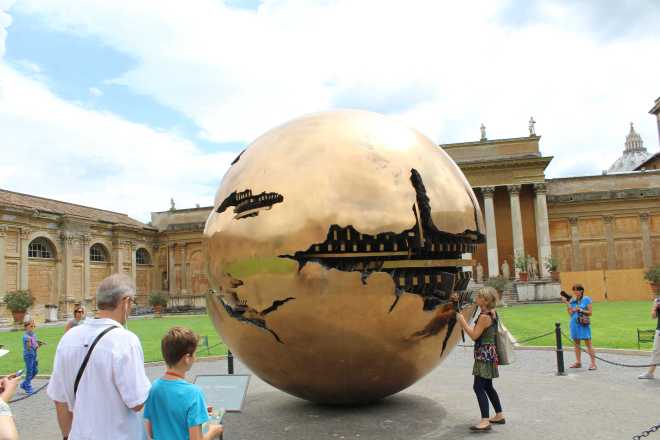 This was just plain cool:

And then we found a giant pine cone (more commonly known as the Fontana della Pigna):

The long and beautiful corridor of The Gallery of Maps, which were unfortunately slightly marred by the restorations that were taking place, as you can see on the left. This was the major cause of the traffic jam, which you can also see in this photo. It took us about 30 minutes just to get to the end of this corridor. It was like we were human lava. Or sheep. Baaa. 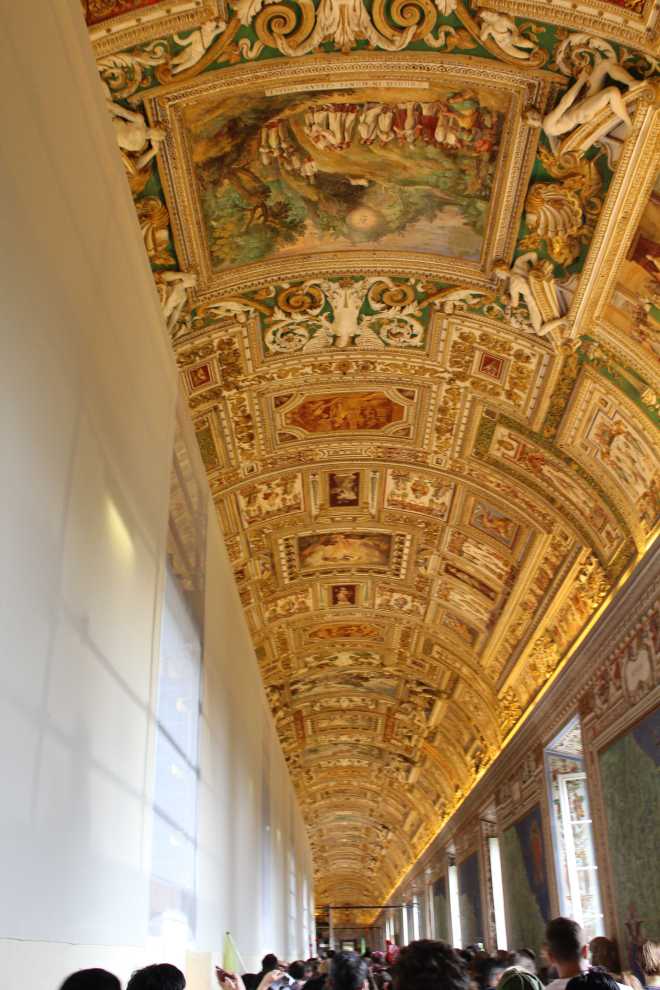 We made it! Also, this is pretty:

At last, we made it out of the herd of humans and proceeded to our next destination:

Now, if you’ve been, you know that pictures are not allowed. But look what Francy managed to sneak a perfect, non-flash, non-blurry shot of…. 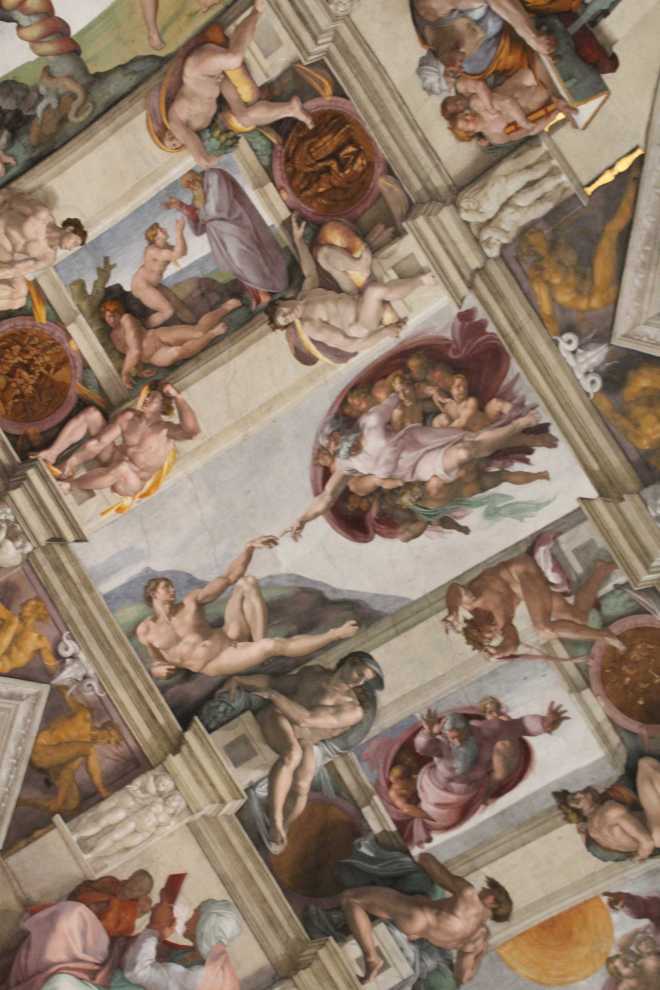 And Samsonite really wanted to get a picture with the Sistine Chapel. This was the best shot we got, so that’s what you’re stuck with:

As a side note, we both agreed that the Sistine Chapel was actually kind of disappointing. I mean, it was beautiful and impressive and obviously very historically, religiously and artistically meaningful, but it was no more impressive that all the other ceiling and dome paintings we’ve seen, not only in the Vatican but in churches and basilicas all over Europe. Nonetheless, Samsonite checked it off the bucket list, so he’s pleased.

One fun benefit of visiting the Vatican Museums is that you can cut straight into St. Peter’s Basilica without having to wait in yet ANOTHER line! Two long-ass lines avoided in one day. Great job, Samsonite! 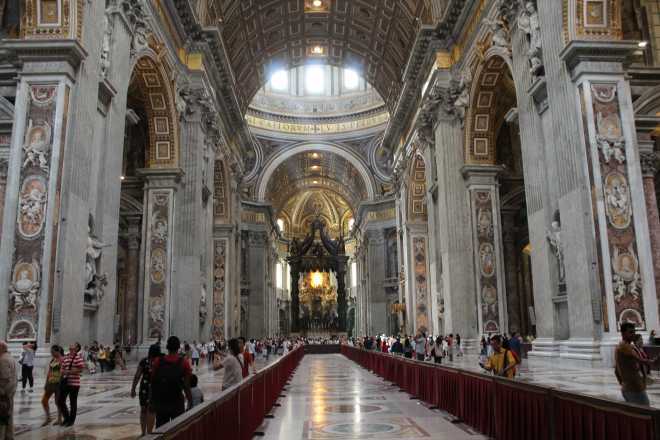 The Papal wall of honor: 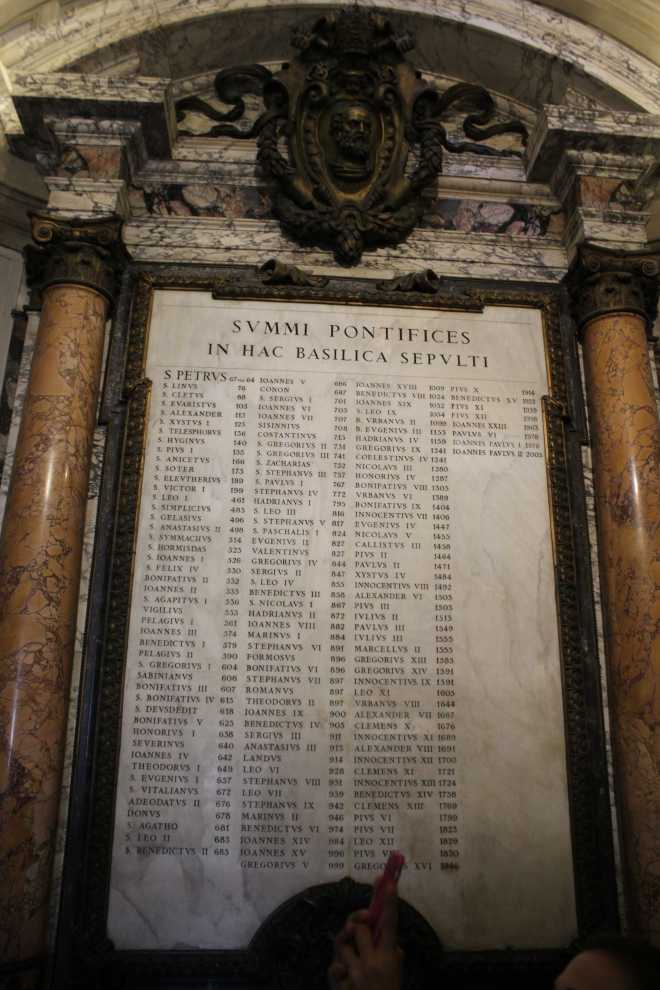 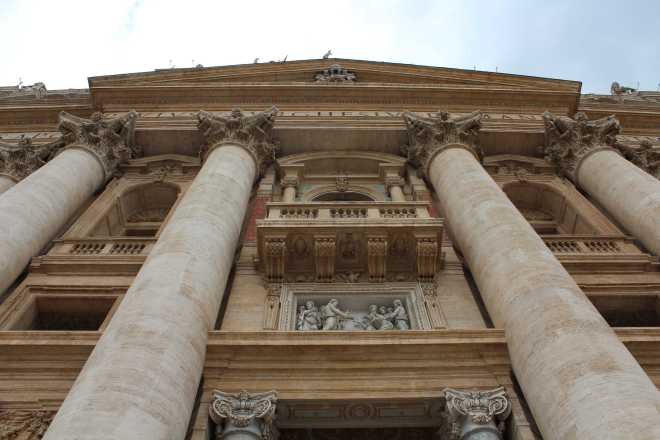 Took a hike up the dome of the basilica to get an awesome view of the city (and a workout!): 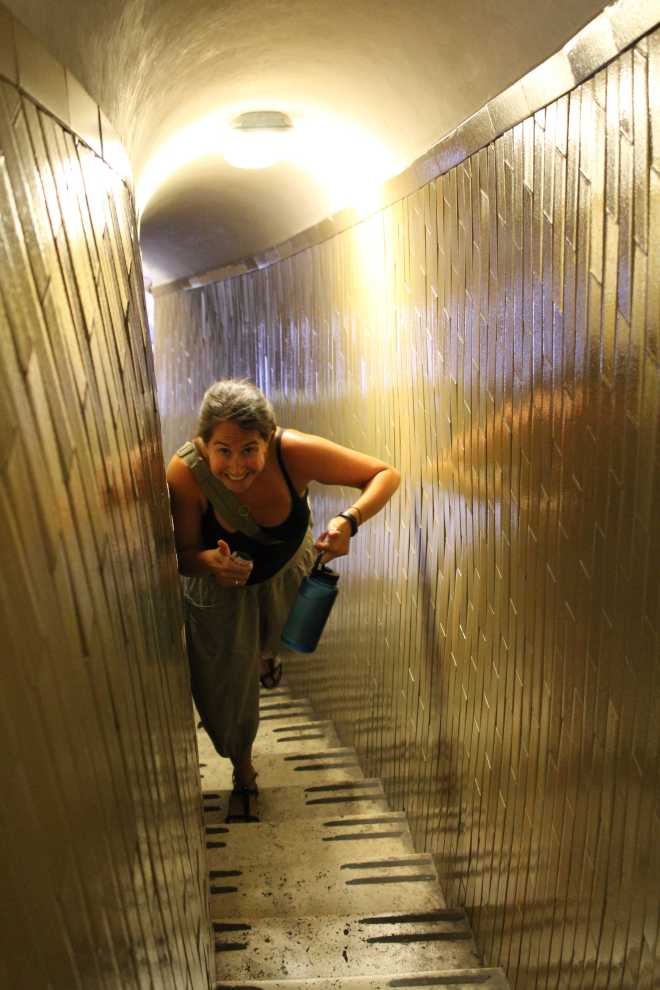 Some awesome views of the Vatican Gardens, St. Peter’s Square and the city of Roma: 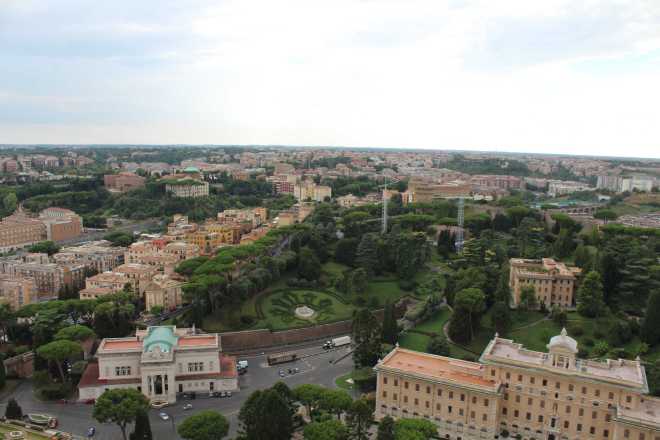 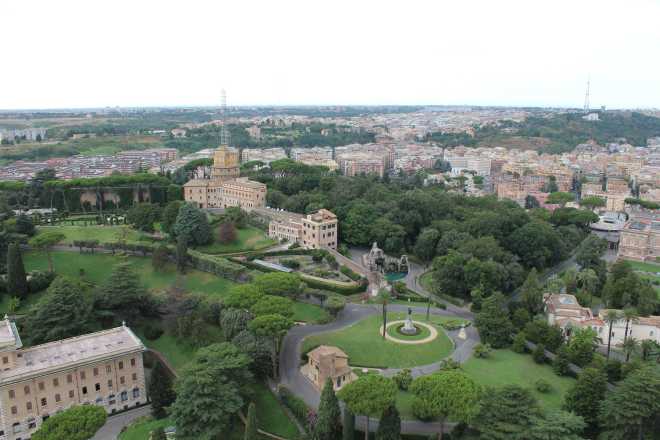 And somehow Samsonite managed to sneak himself into this one:

The clouds hath parted and heaven doth shine down on the Earth (that probably doesn’t make any actual sense, but you get what I’m getting at…):

For whatever reason, my phone took amazing photos of the dome in this lighting and we couldn’t choose between them, so you get four. You’re welcome: 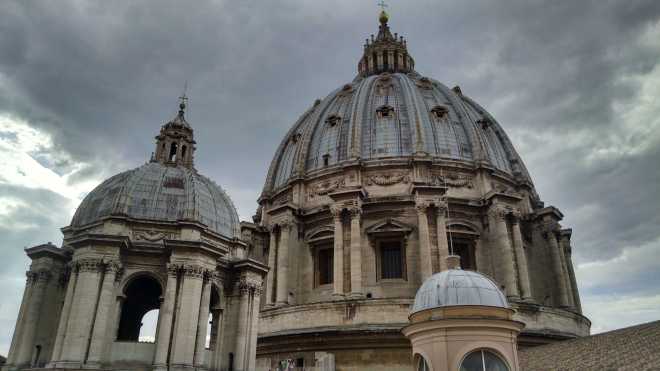 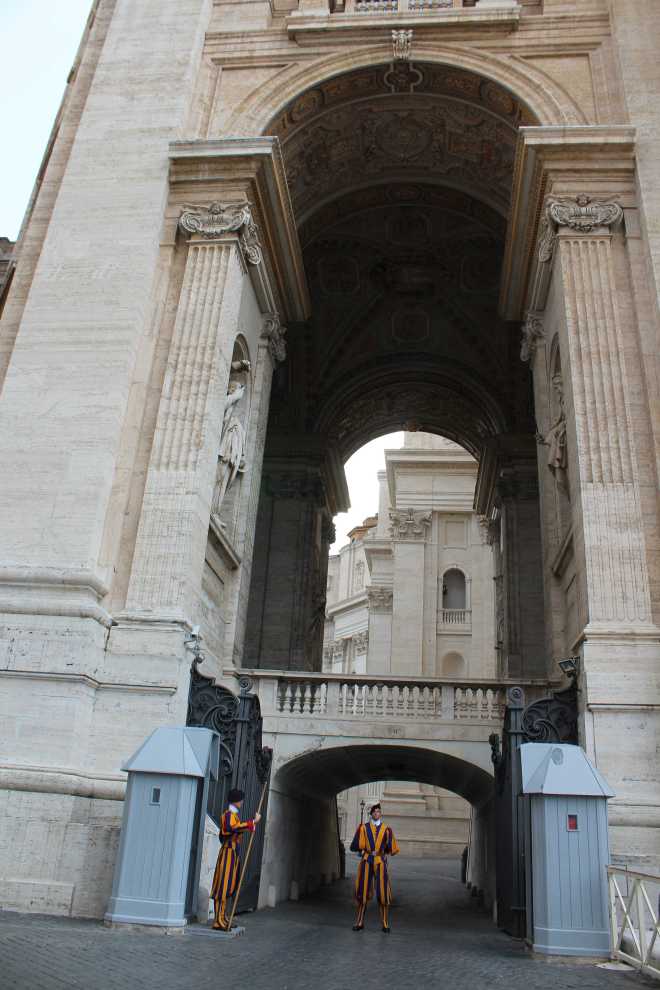 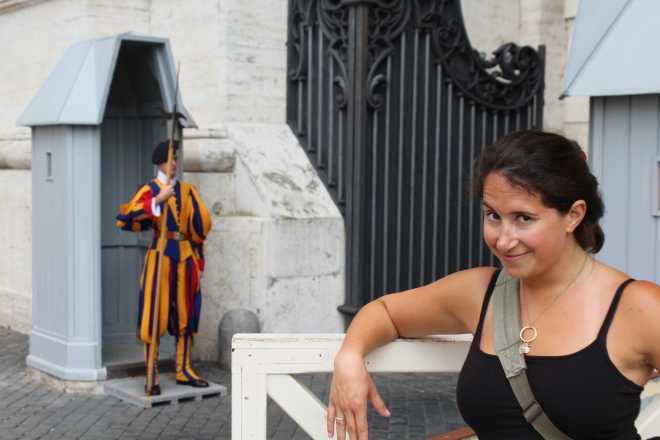 The cool statues, but from the square!

It took us like, 20 minutes to remember that these things are called “Obelisks”. We kept calling them “Basilisks”. Must be too much Harry Potter…

The Basilica lookin’ all sexy with the dark grey clouds looming overhead: 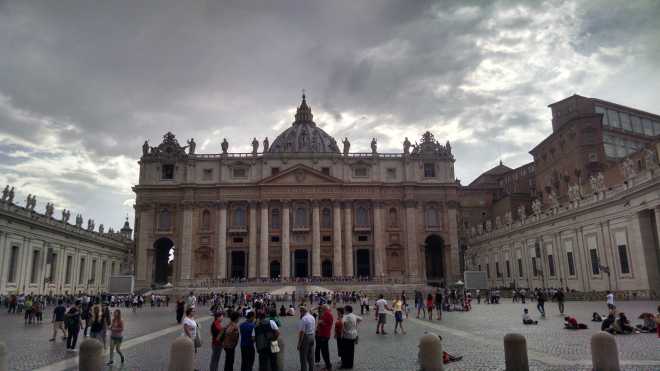