Taiwan’s Eastern Seaboard is ABSOLUTELY something to write home about (and, of course, write a blog post about). Visiting the Pacific Coast of Taiwan was described to us as an “absolute must” and so, after a fabulous day of exhilarating hiking and wish making along the Pingxi Line, we took off for our familiar and dearly missed ocean, visiting beautiful and amazing sights, cities and national parks along the way.

Jiufen is another old mining town, but built into the hills overlooking the ocean. In fact, they call it the Santorini of Taiwan. It was pretty, but Santorini? Mmmm… 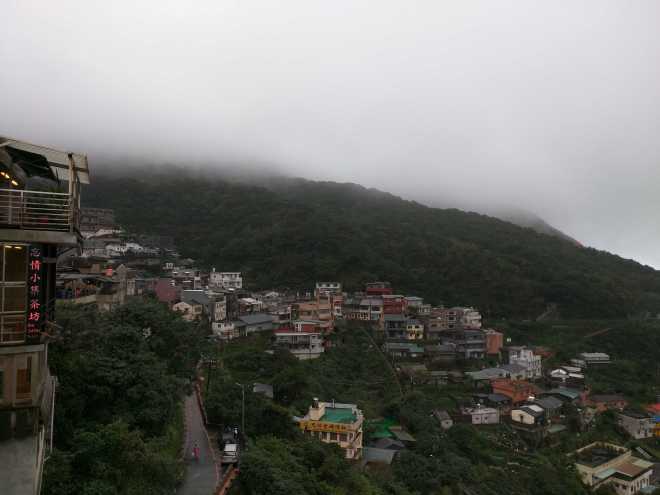 There is an awesome market along Old Jiufen Street, where there is a cold-brew coffee stand selling amazing and delicious ice-coffee. As you can perhaps tell, I was feeling pretty rough that morning and was in dire need of a good cup of coffee:

One of the old mining tunnels, caged off so sneaky little turtles like Samsonite don’t go creepin’ on in and messing things up:

We then made our way over to Jinguashi, a neighboring town of Jiufen. This is also an old mining town, specifically GOLD mining (ooooh!). It was used by the Japanese as a POW camp in WWII:

First we went to check out the Golden Waterfall. Though it wasn’t made of liquid gold as we had expected, it was still beautiful: 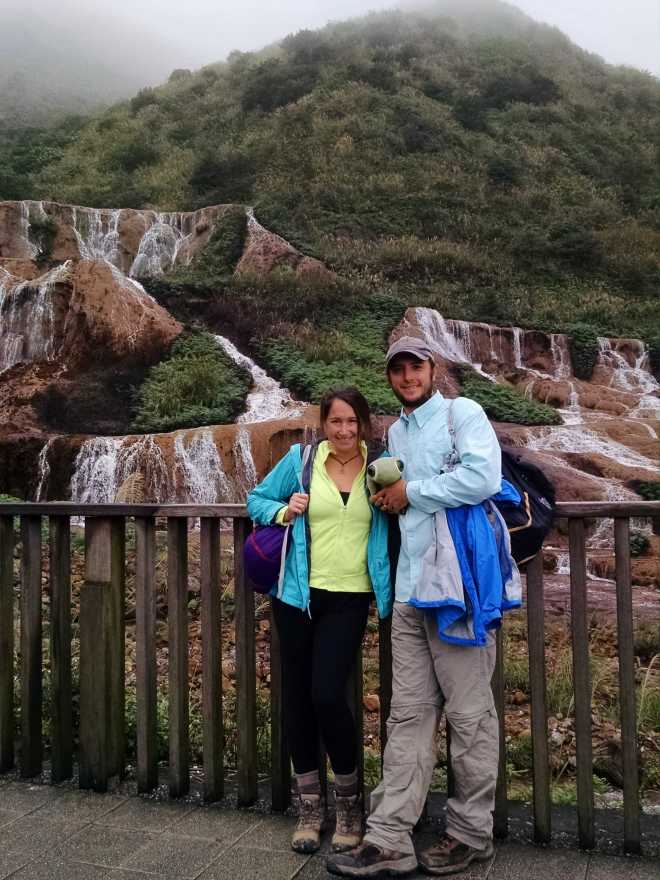 … almost as beautiful as we were (again, I remind you of my rough morning):

We then paid a visit to the Gold Museum: 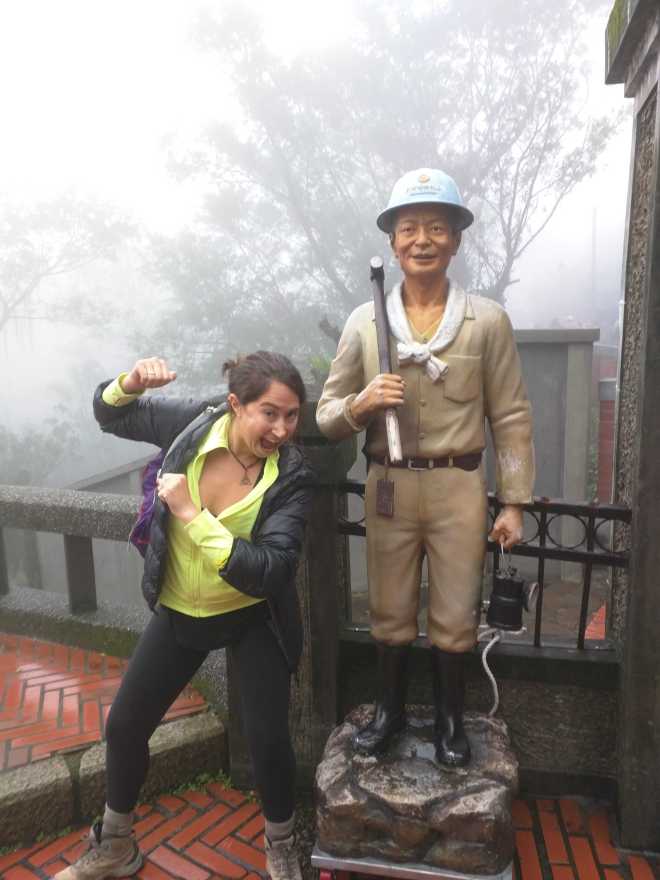 Where Samsonite tried to steal 220kg of pure gold, worth 251,362,300 New Taiwanese Dollars (~$7.5 million USD)!!!!!! Can’t take that turtle anywhere. Apparently this discovered block of gold (the real one, at least… no way would any museum in the world display an actual block of pure gold worth $7.5M for the public to ogle and touch) holds or held some sort of world record. 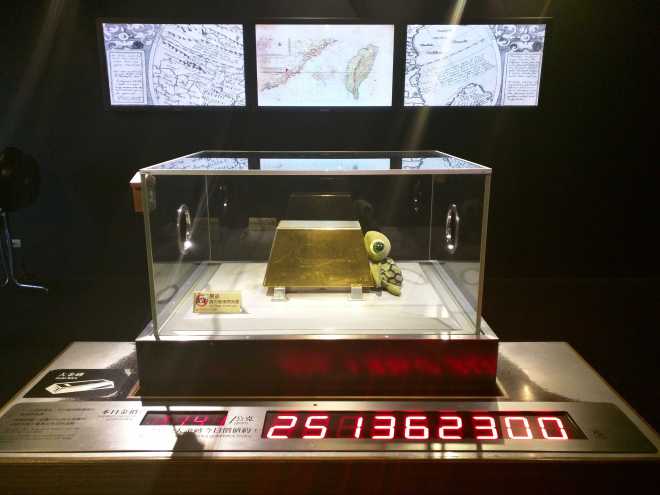 We then took a walk through an old gold mining tunnel. We had to wear hard hats. At this point, my rough morning had turned into a rough day and this was the result of all of our attempted selfies:

Miners (or POWs) hard at work:

We hiked up to the Ogon Shrine, an old Shinto Shrine, which was completely covered in fog. But do not fret, as this allowed us to practice our bad-ass mortal combat skills for the camera:

If there is one specific place that anyone who has visited Taiwan (namely, Papa Hollander) will tell you to go see, it is Taroko National Park, situated in the beautiful county of Hualien. As we dared not defy my father, we rented a scooter and explored the area, starting with Qingshui Cliffs: 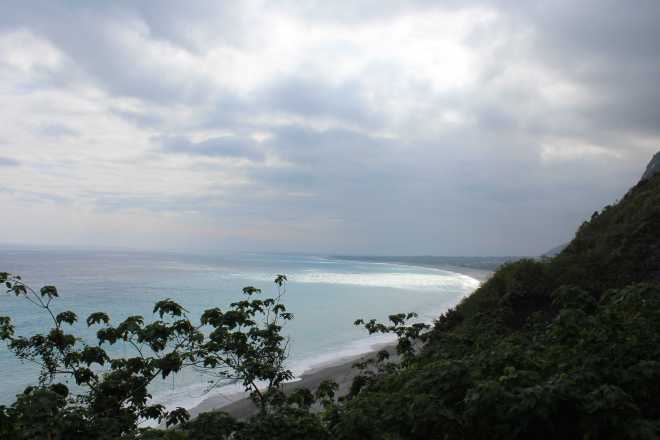 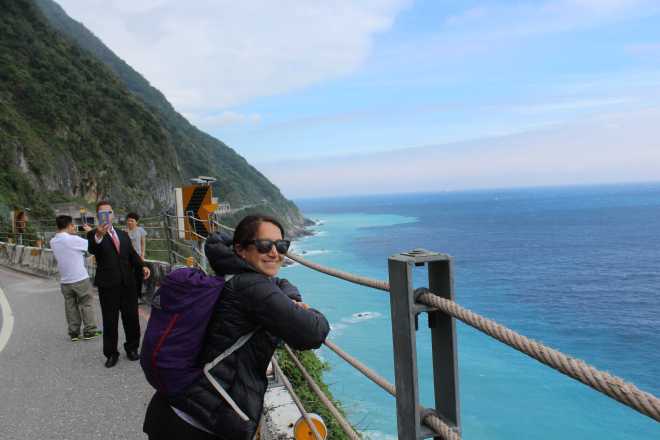 We then entered the park and scooted our way up along the famous Taroko Gorge: 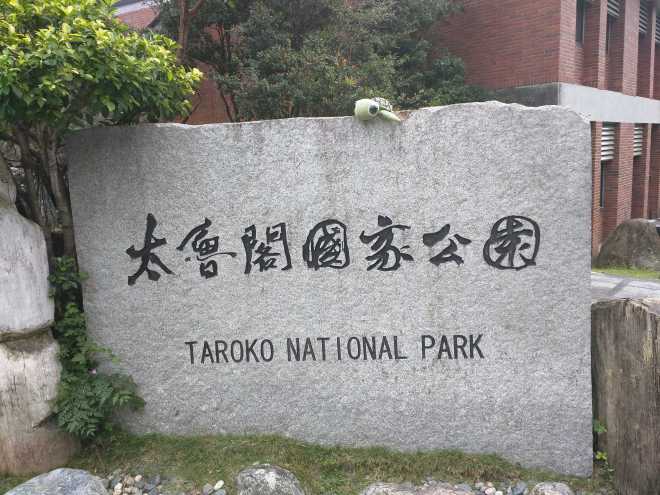 As there are tons of different hikes you can do (sadly, the Tunnel of Nine Turns trail was closed) and we were feeling pretty lazy, we just picked a couple easy ones, starting with the Baiyang Trail to see the Cave of Water Curtain. Off we go!

Some gorgeous views were had along the way: 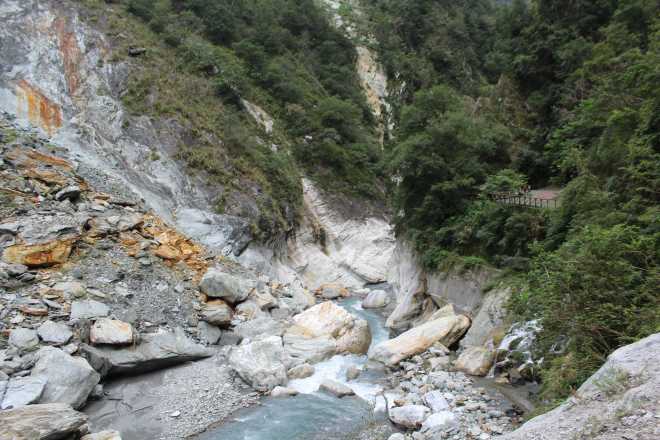 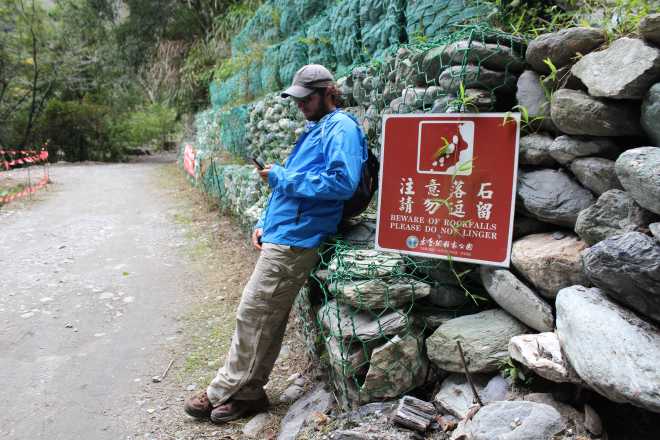 Inside the Cave of Water Curtain!

This is just awesome: 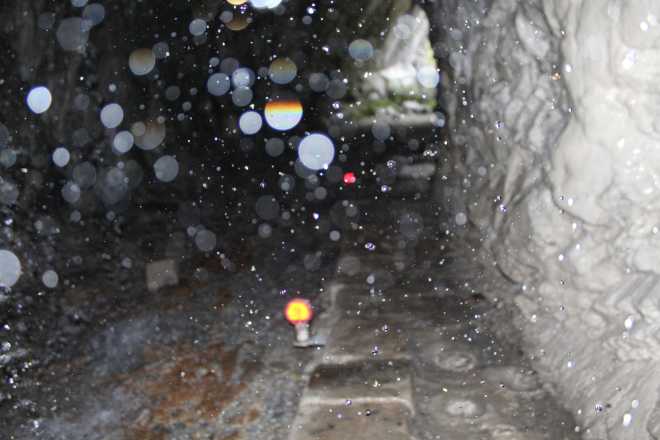 Made our way through the park to our next hike, seeing some beautiful bridges and tunnels carved into the gorge along the way: 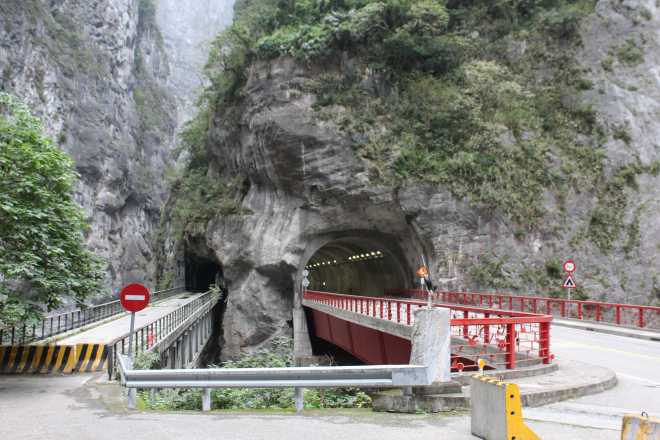 And then we hiked along those tunnels, getting impressive views of the gorge as we went: 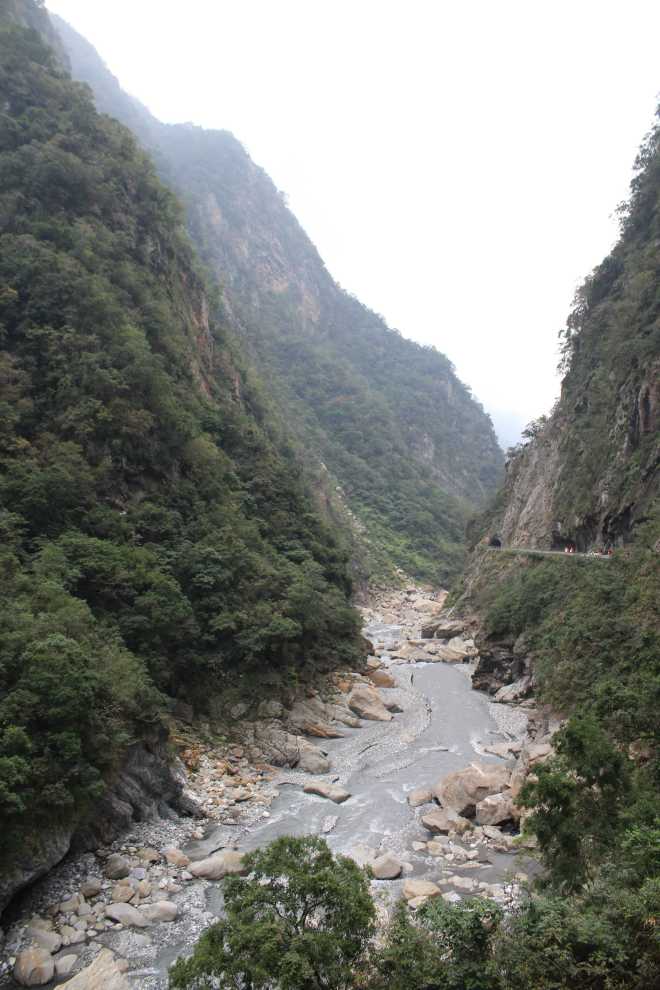 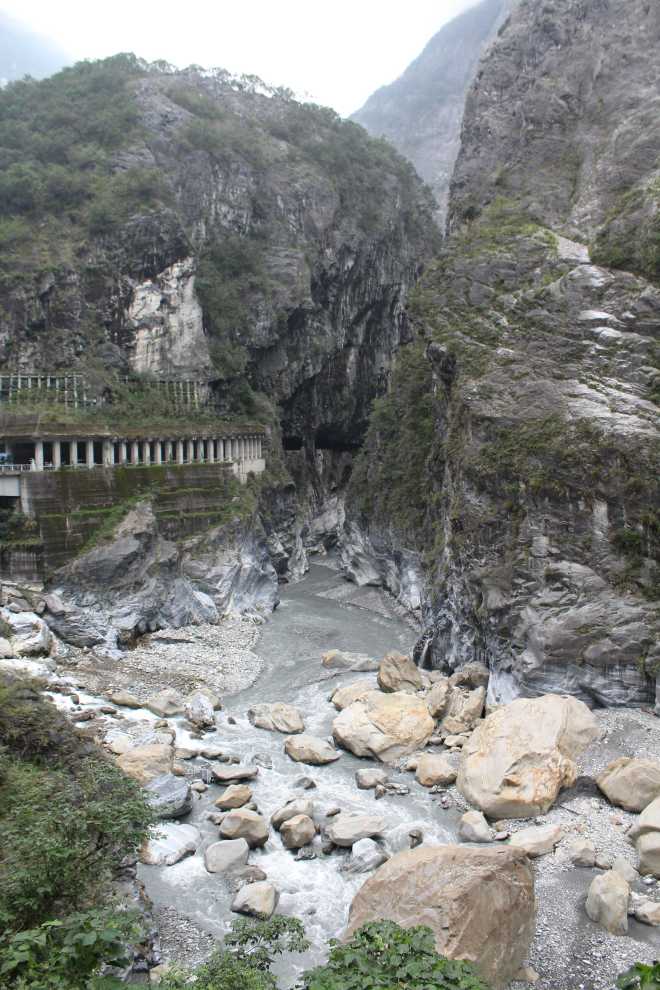 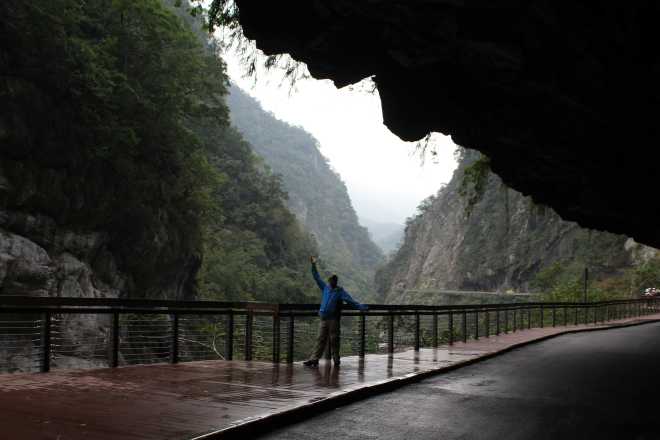 Notice the distinct strata of the sediments:

And this beautiful little emerald pool:

The shrine was nice, but the views from the shrine were far more impressive: 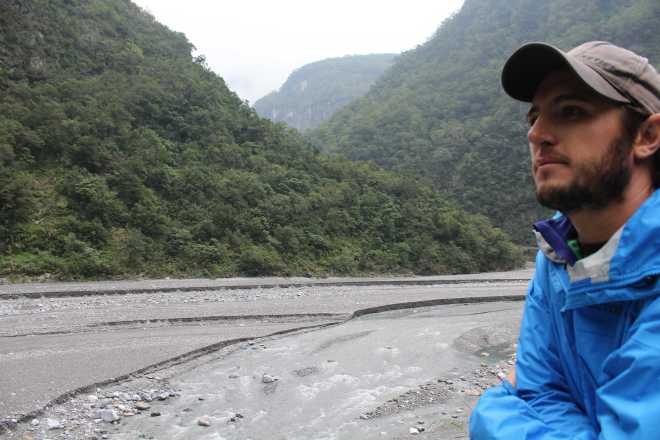 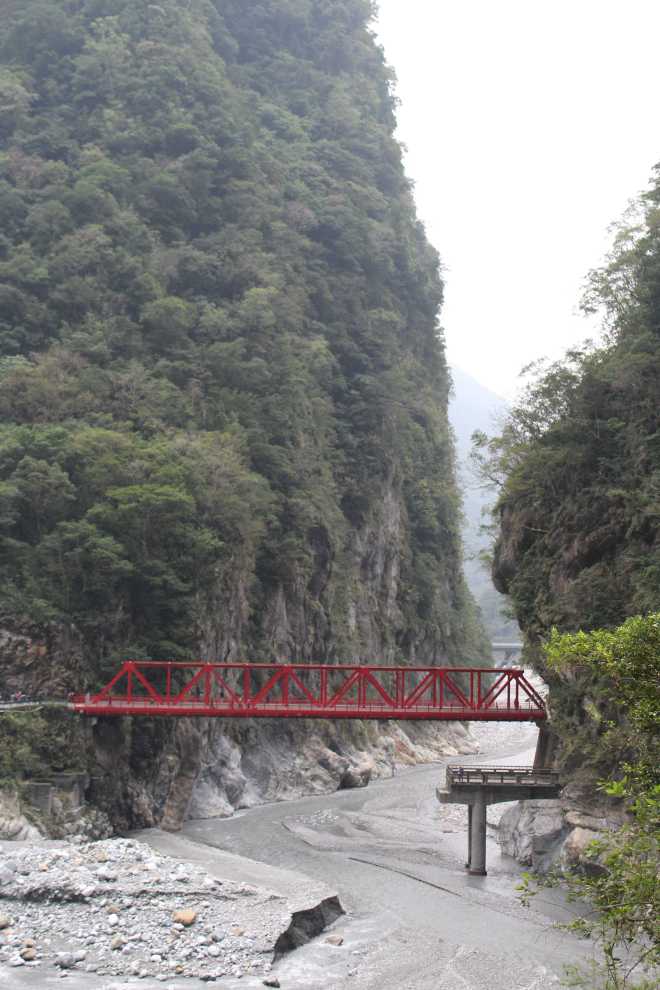 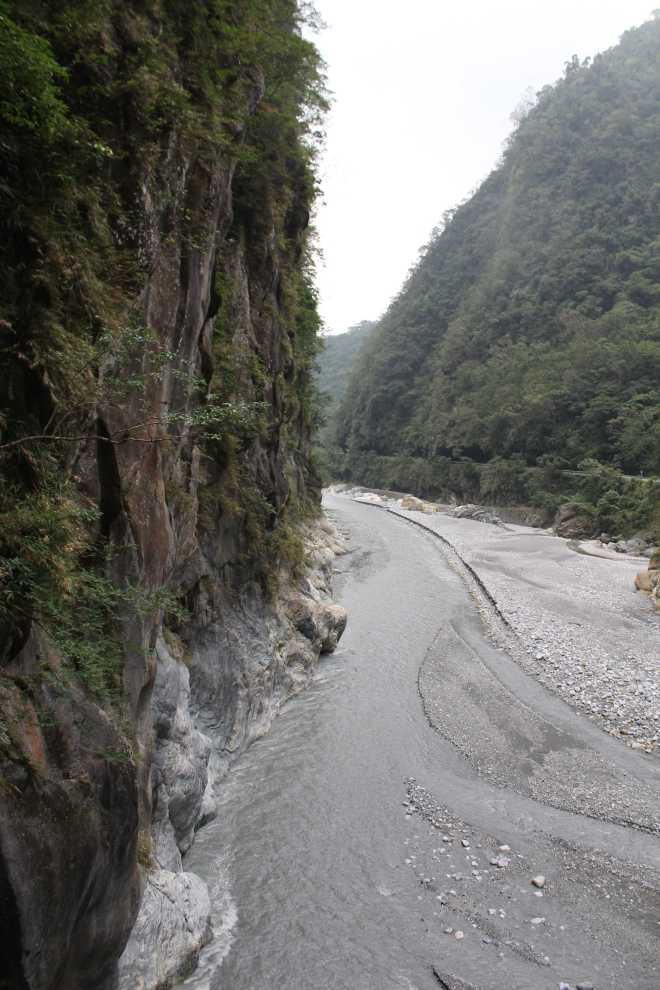 After a long day, we made our way back to Hualien City, where we went on the hunt for food. We had been craving some beef brisket noodle for over a week, so we were overjoyed when we came across this DELICIOUS beauty:

Had a few hours to kill the next morning before our train, so we took our scooter for one last ride to the Hualien City beach to dip our feet into the WESTERN side of the Pacific Ocean! MUCH warmer than the Eastern side, but no surprise there, as we Californians are far too familiar with how cold our side of the ocean is (I know, I know… woe is us). Helmet still on, Francy couldn’t wait to touch the water. Safety first! 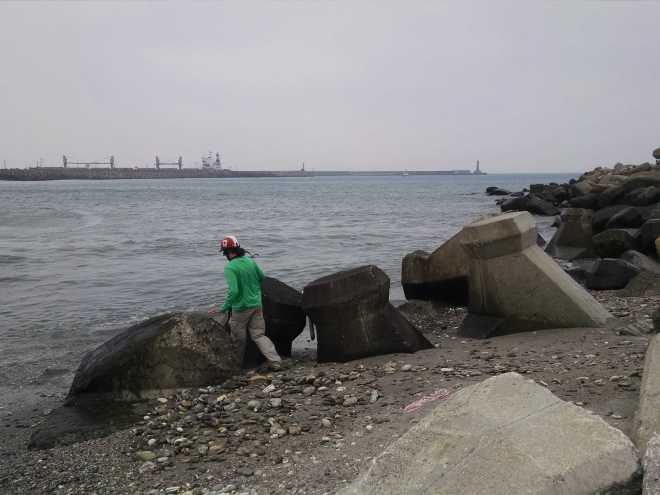 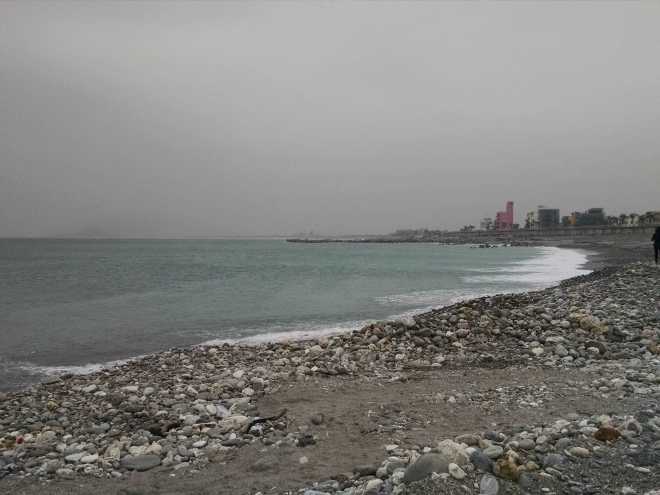 After a fantastic time in Hualien, it was time for us to make our way back up to Taipei to catch our flight to Japan the next day. This was the oh-so-unfortunate view from our train (the same train on which the awesome man gave us soup, if you remember the story from our “Taipei” post):

Had one final night in Taipei before taking off for Japan, so we made our last Taiwanese supper just like our first… hot pot! Right next door to a police station. And yup, police vehicles in Taipei are… you guessed it… scooters! 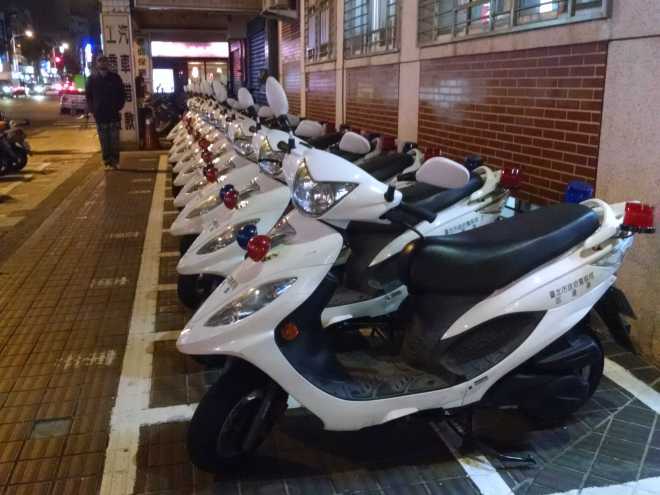 Flew out of the Taoyuan International Airport the next morning, which was much less of an airport than a high-end mall, with super fancy restaurants and ALL the high-end brand stores. 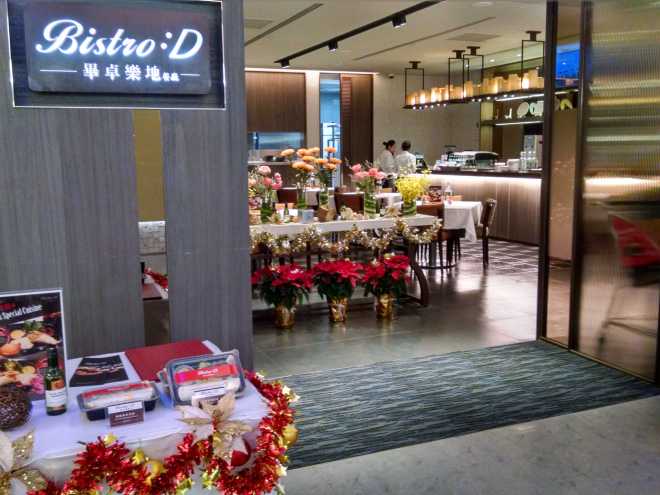 Taiwan – Many friends and family had set insanely high expectations and guess what? You delivered. We had an absolutely incredible time and we can’t wait to be back. Mike and Anne – hope you’re ready for round two!