Took our “car” down to the Amalfi Coast, where we spent a few days exploring various parts of the coast, driving the windy, sphincter-clenching, cliff-hanging roads, and just walking and hiking around. Details and photos below.

As we missed Capri when we were on our honeymoon (the boat was supposed to stop in Sorrento and we had an excursion booked to Capri and Pompeii, but due to bad weather we had to port in Naples, where, not only was it pouring rain, we were instructed one by one as we were walking off the boat to remove all jewelry and expensive looking items… to say this was one of the shittiest cities either of us had ever been to is an understatement, but I digress, as this has turned into the longest parentheses of all time…), we decided to make this our first stop on our Amalfi adventure! We drove out to Positano, hung out there for a bit, and had lunch at this awesome little spot along the water while we waited for the ferry: 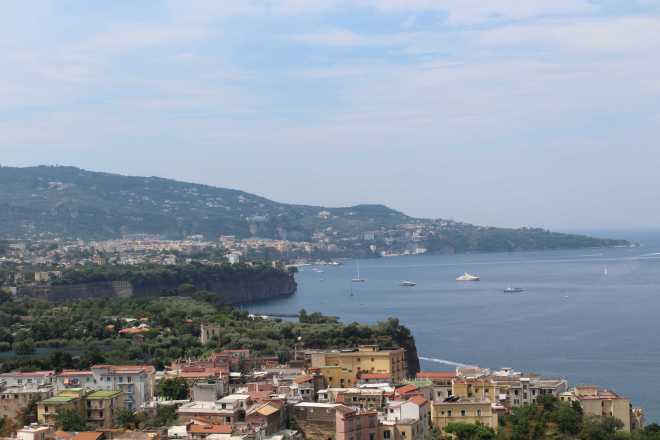 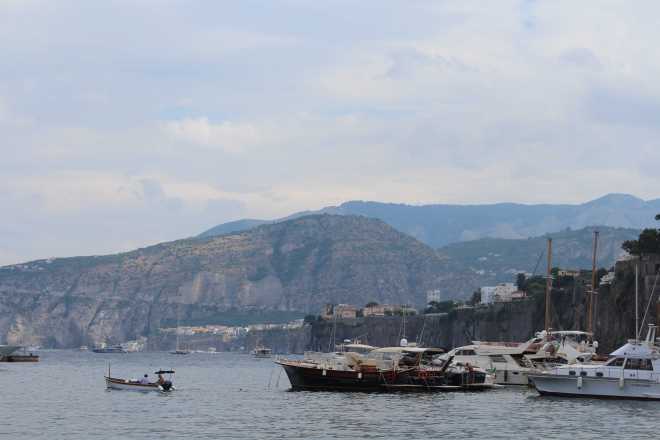 We then took the ferry over from Positano to Capri and then hopped on a boat cruise to get a tour of the island, taking off from the beautiful Marina Grande:

A fun little statue of a man sits on the edge of this rock: 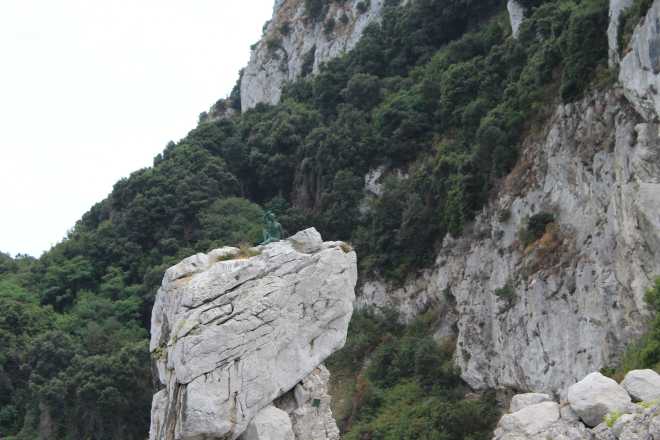 The naturally occurring caves and formations of this limestone island: 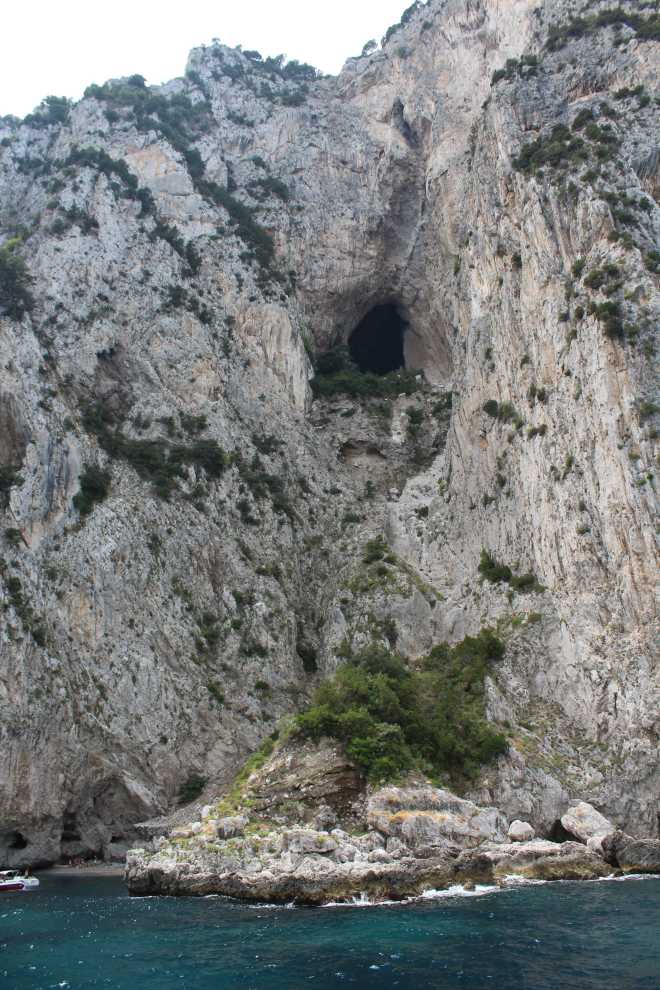 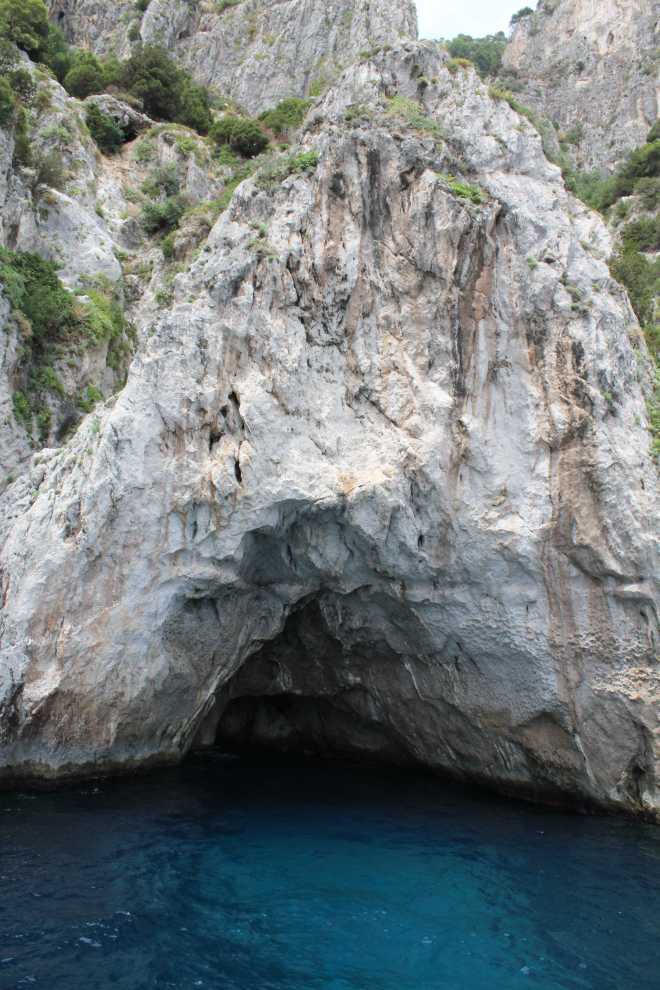 Our boat backed in so deep into the cave, people were able to touch the rock. How we didn’t hit it, I have no idea.

There is supposedly a super exclusive, super expensive restaurant up there. Apparently minimum spend is $100/person.

Some decent real estate, I guess… I really pity the person who has to live there. So unfortunate.

And here… this poor sod. Must be really tough waking up every morning to this dreadful view… 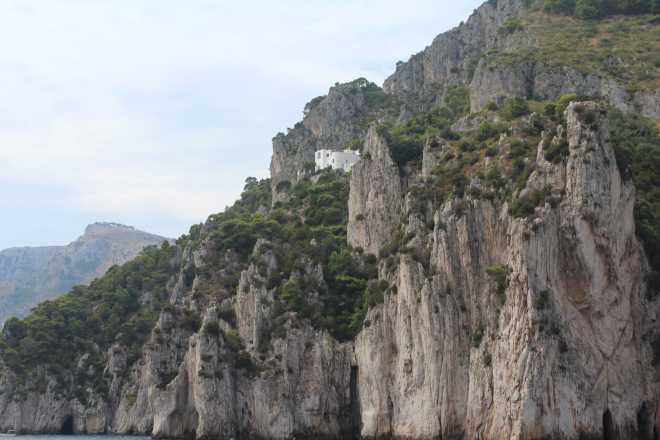 The “Lover’s Arch”. They (and I have no idea who “they” is, but roll with me here) say that if a couple kisses as they go under the arch, said couple will be happy forever. I practically had to force Francy to kiss me. Alas, he succumbed. 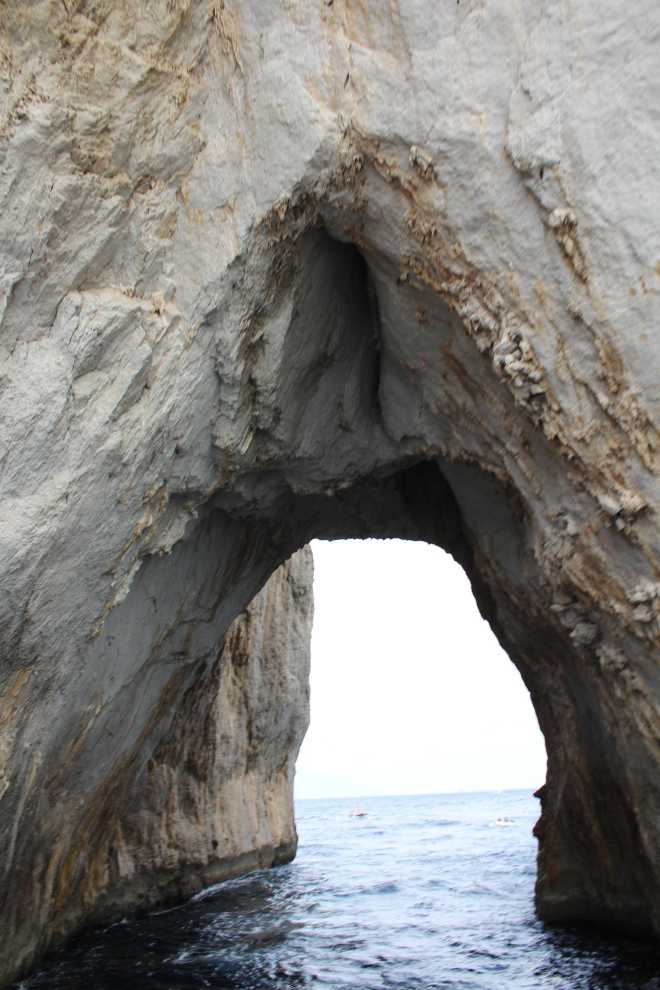 And that unfortunate piece of real estate supposedly belongs to the one and only Giorgio Armani! 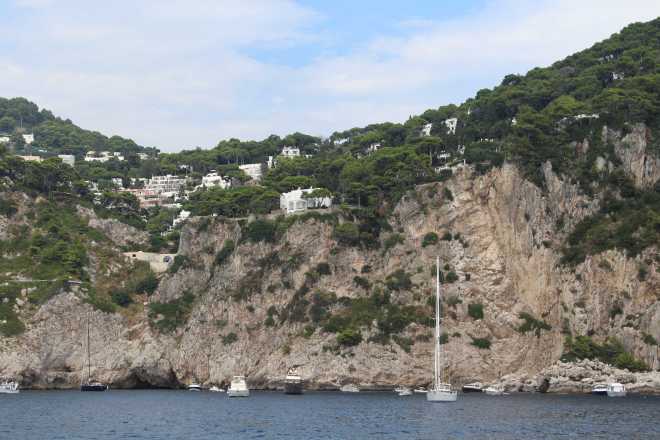 And this pitiful residence (look carefully… there is a full on CASTLE at the peak of this rock), formerly Mussolini’s summer house, is now for sale for a whopping 38 million Euro! What a steal! 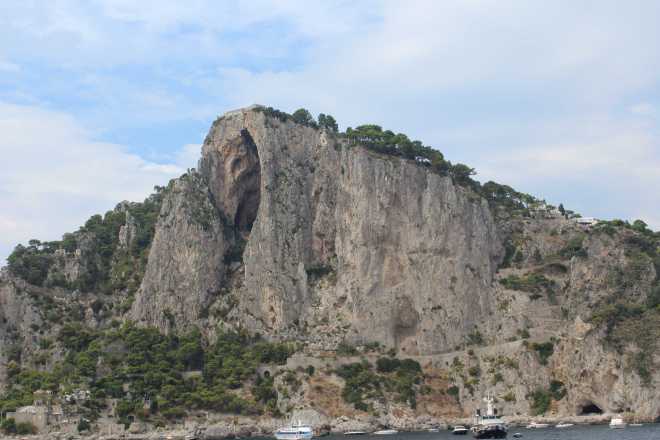 We desperately wanted to take a small boat in but were told that the Blue Grotto was closed that day due to rough waters. We were also told that swimming was forbidden in the Blue Grotto… at all times… 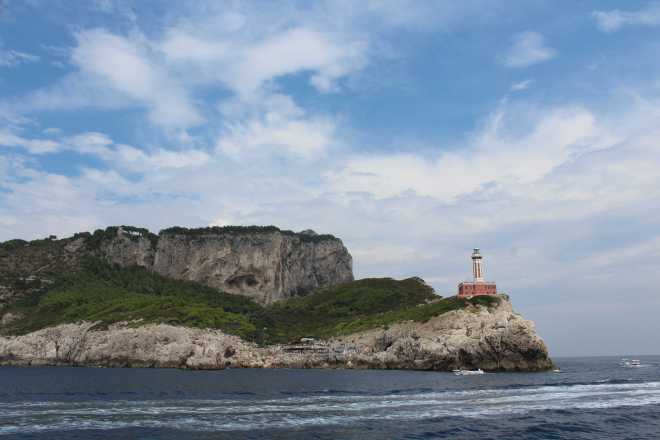 A yacht, if you could even call it that… Looks more like a spacecraft to me.

And back to Marina Grande we go:

Cruising Along the Amalfi Coast

Returned to Positano, got our “car” and began/continued driving the beautiful, albeit terrifying, Amalfi Coast! Here’s a gorgeous view of the city of Arienzo: 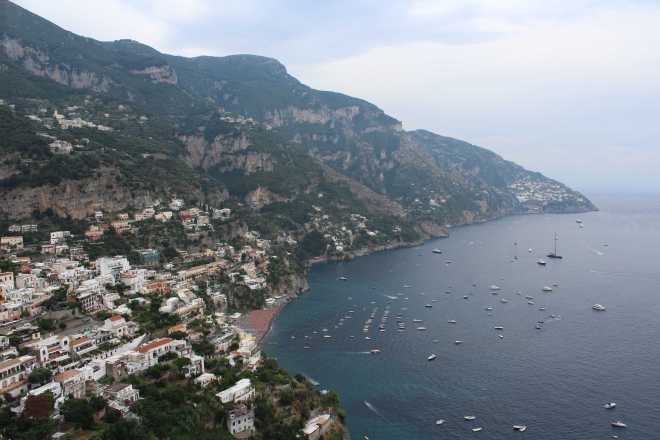 Now, when I say this drive is terrifying, I don’t just mean that at times you are hugging the rail with a 300 foot cliff directly to your right, squeezing along the tiny road with a bus whizzing past you in the other direction (because that is very obviously terrifying). There are times when you are practically driving on a sidewalk, you are so close to the establishments around you. I could reach out of the window and touch tabletops of restaurants, grab clothes off of racks, shake the hands of passersby… it was a miracle I didn’t run anyone over. This was the one time we were THANKFUL our piece of shit car was peanut-sized (apologies for the blurriness of the photos – we were taking them while fearing for our lives and for the lives of those around us): 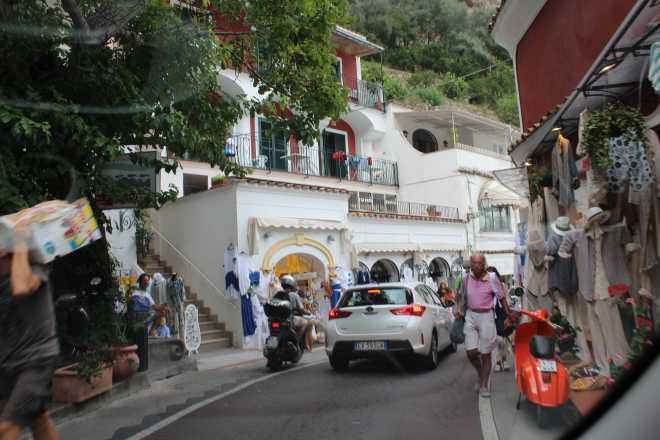 Some cool driving shots Francy took with the GoPro:

We made it to Amalfi! 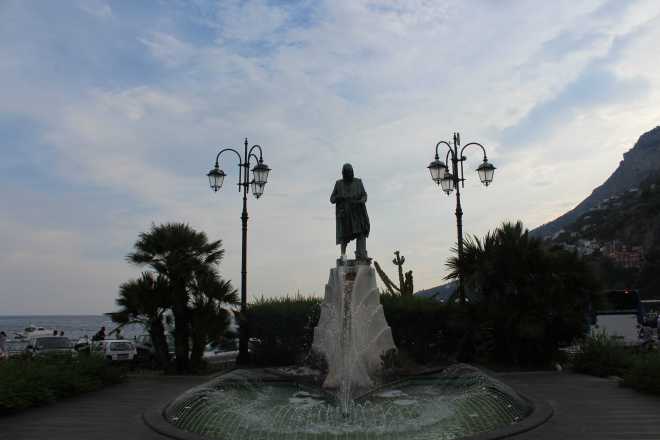 He really is such a naughty turtle: 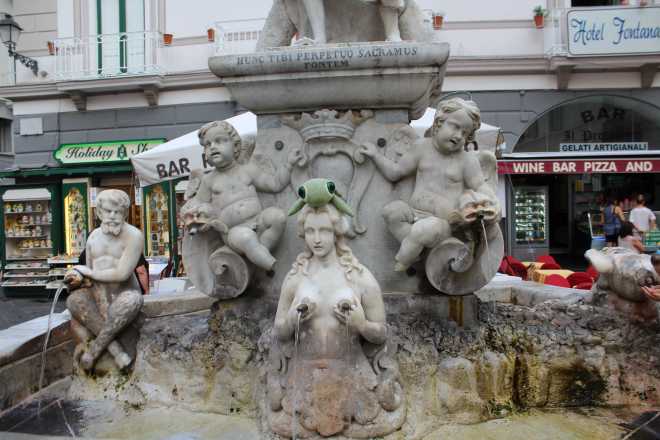 Continued the drive as the sun was setting, which allowed for some gorgeous views and photos (thank god we made it to the end BEFORE the sun fully set… driving this in the dark would have been a step past sphincter-clenching, if you know what I mean…): 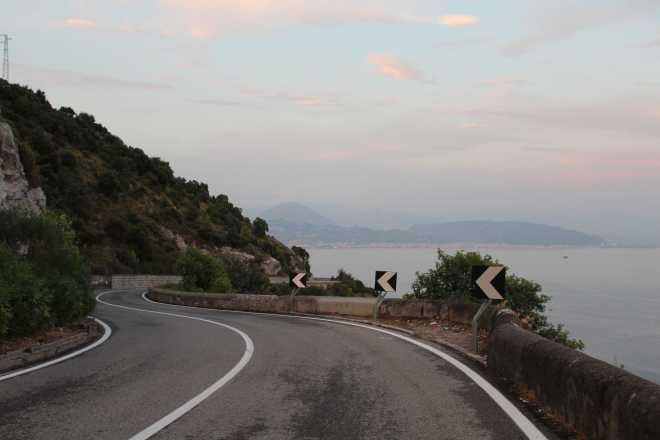 Cetara – another beautiful small town along the Amalfi Coast: 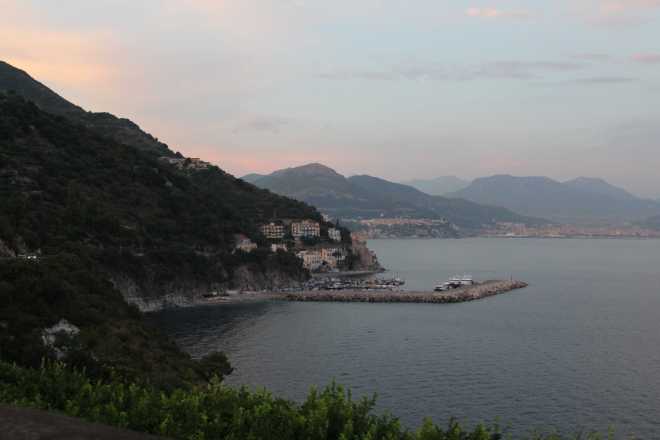 Look at this… how do people not die here daily?? Imagine this when you throw a BUS into the mix?!?! The buses don’t even slow down for you. They give you a small honk to let you know they are coming and you have to quickly slow down and pull over as far as possible to let them through, at which point they pass INCHES from your car. I don’t want to know what it looks/feels like on the pedestrians’ side!! 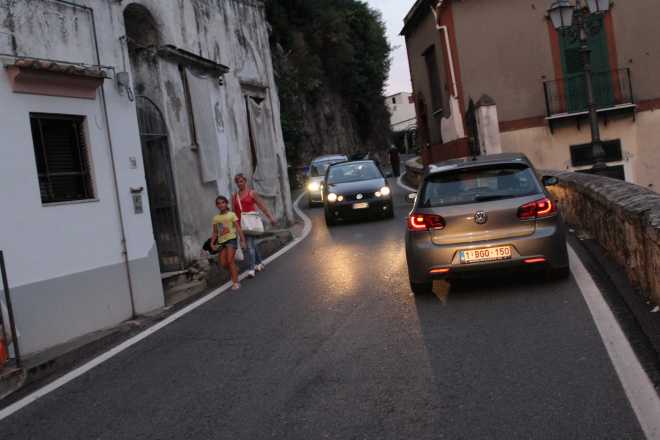 Francy took about 68 photos of this hotel. One day…

And finally, a beautiful sunset view of Vietri Sul Mare, with the city of Salerno in the background:

Commonly ranked one of the top hikes in the world, the Path of the Gods takes off from Bomerano (very conveniently, and unintentionally, around the corner from where we were staying), at an elevation of ~1,900 ft (~580 meters), snakes along the mountainsides of the Amalfi Coast, offering absurd views at every turn, passing through the beautiful and quaint town of Nocelle at an elevation of ~1,300 ft (~420 meters), and then cutting down about 2,000 stairs to sea level, where you reward yourself with food, a dip in the water, and a nap on the gorgeous beach of Positano. The perfect end to a 6 mile hike!

Samsonite is stretched up and ready to go:

Bomerano (our starting point) in the background: 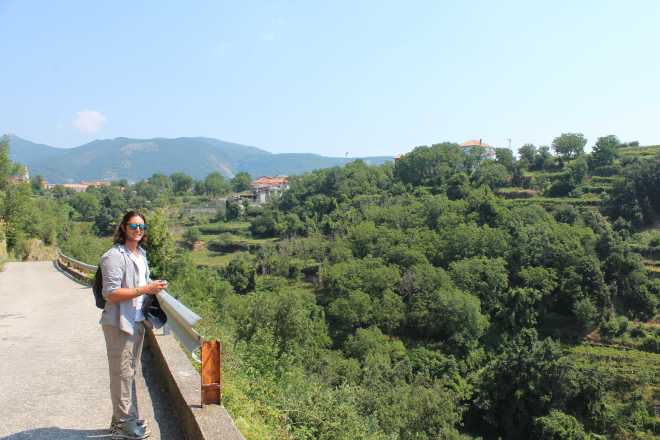 An abandoned house that we would love to make our own (Francy was investigating):

Giving me his “sexy pose”: 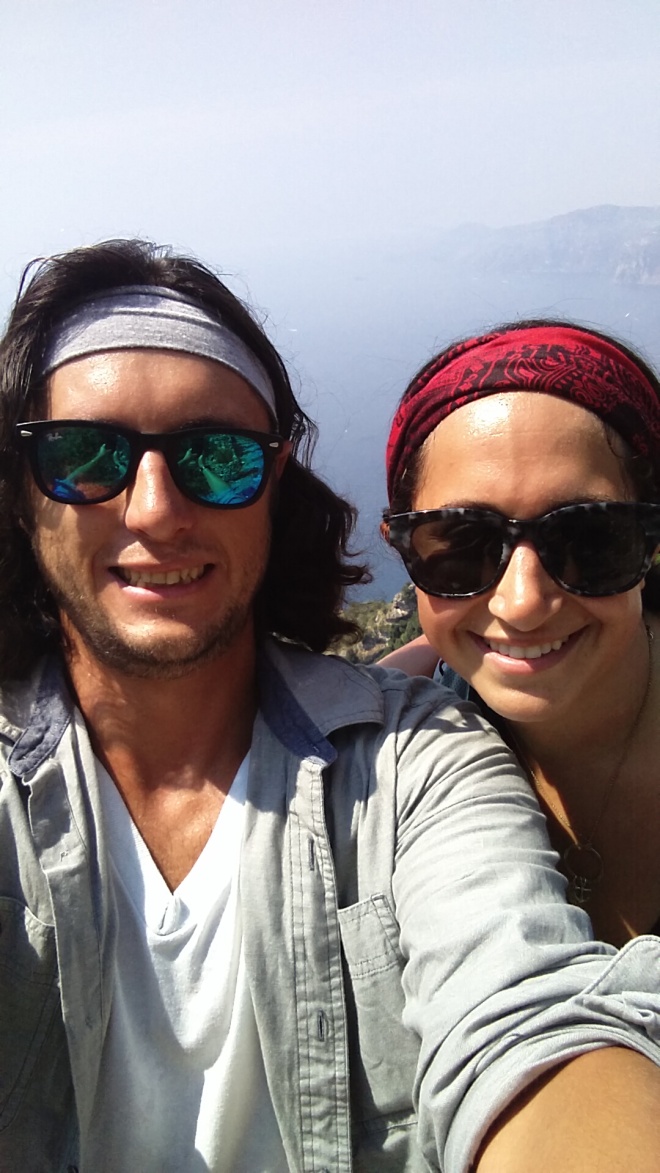 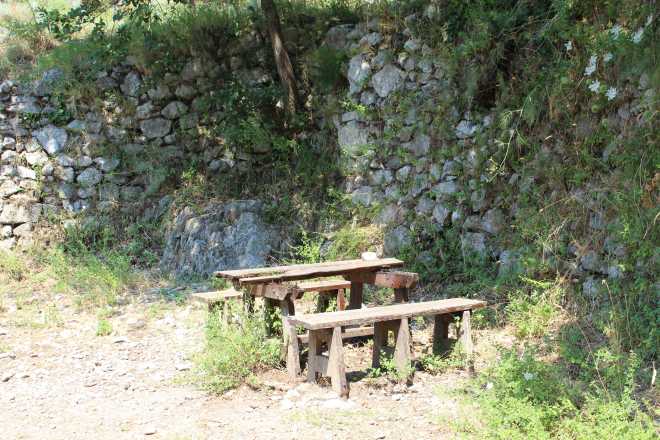 Only a SLIGHT drop… 😉 Also, a cool view of the coastal drive we had survived just the day before: 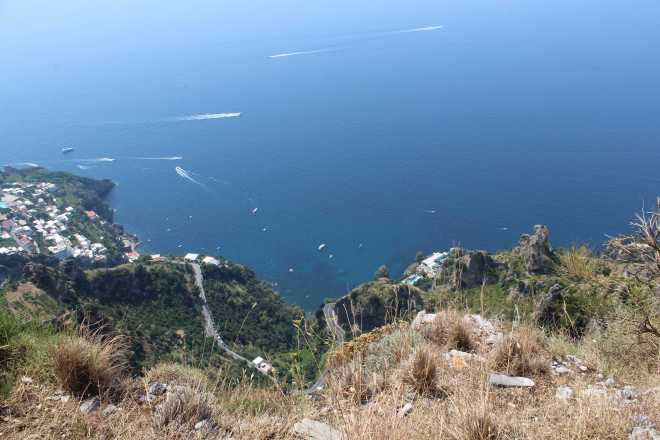 Positano – it looks so close!

Poor turtle’s exhausted (it’s tough work being lugged around in a backpack all day):

We made it to Nocelle, where this awesome tiny family-run cafe/restaurant greets and provides hikers with a nice spot to rest and enjoy a refreshment/snack along the way:

Samsonite cooled himself down with some fresh squeezed local OJ!

Who WOULDN’T want to stay in this villa?? … If it really is a villa, that is…

Beginning the 2,000 step descent to Positano: 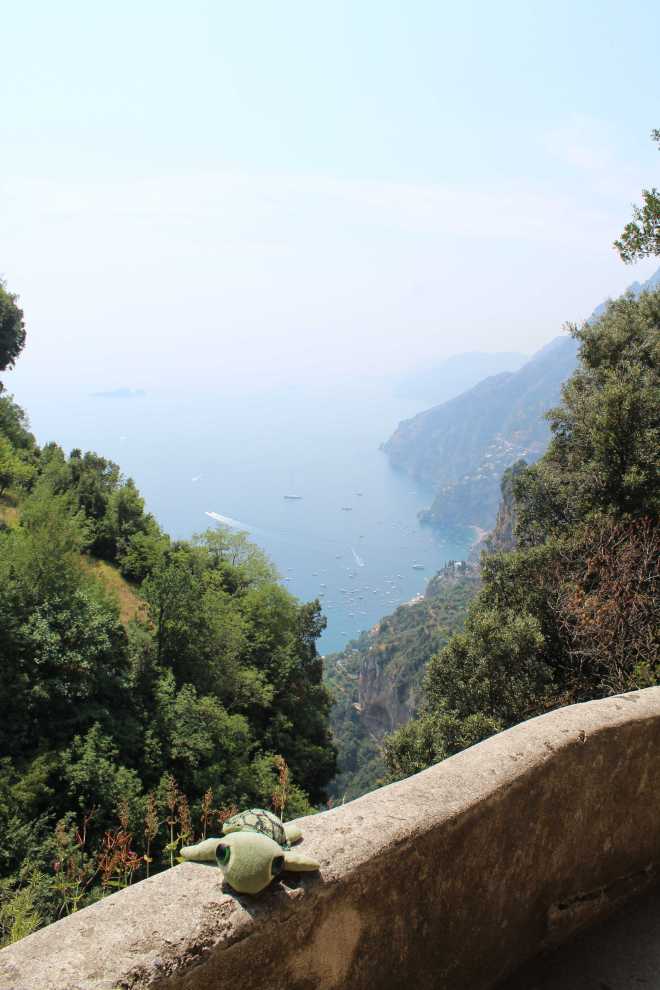 This would have been an upgrade from our car:

A little Jackie incessantly barking at us from the rooftop:

Goodbye Nocelle! It was a pleasure meeting you. 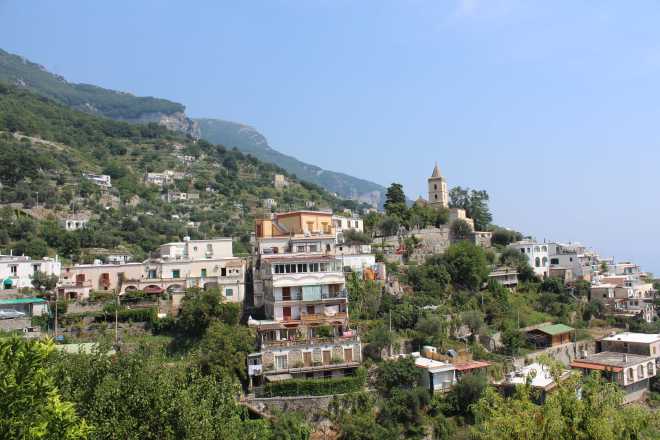 To get back to our “car” (in Bomerano), we had to take the ferry from Positano to Amalfi, then take an hour long bus ride from Amalfi back to Bomerano. The trip back took practically as long as our hike did! Anyway, we started our day somewhere up there in the clouds:

Yup… we were WAYYY up there!

And back to Amalfi: