Said goodbye to the stunning El Nido and took a 9 hour INTSENSE boat ride from El Nido to Coron. And when I say intense, I mean 9 non-stop hours of 20 foot waves, people throwing up, the works. Thankfully, neither Francy nor I get sea sick in the slightest, but even we couldn’t read a book or type on the computer for too long without getting a little woozy. At last, we made it safely in Coron and adventured there for a few days, island hopping and diving in one of the top shipwreck diving site in the world, before making our way back to Manila to catch our flight to Bangkok. Read on to find out more and see pictures 🙂

After sitting on a boat for 9 hours, we opted to walk into town from the port (only about a 40 minute walk). So glad we did, as we saw many interesting things on the way, such as this poster randomly lining a street wall: 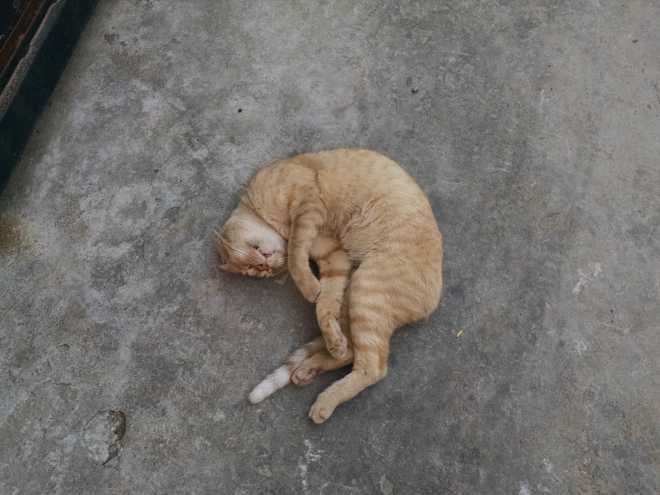 And these two dogs that got stuck together (I’ve heard it can happen but had never actually seen it for myself!):

After FINALLY finding a place to stay, we sat down to decide which island hopping tour we wanted to do the next day. We opted for Tour A because it included Kayangan Lake (which we really wanted to see) and… it was cheaper 😉 Getting ready to take off: 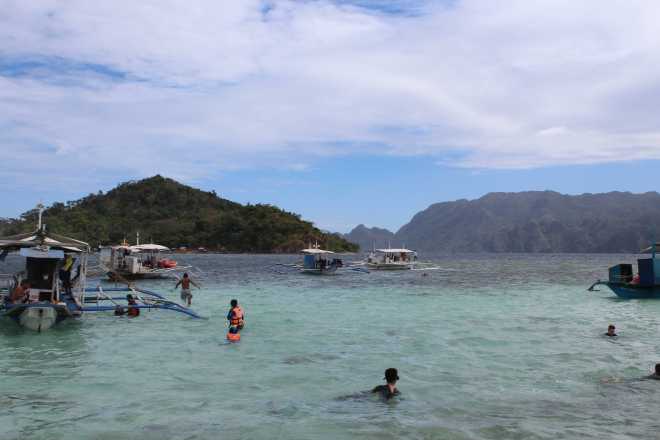 We then made our way over to Atwayan Beach, where we had lunch and relaxed, befriending the local island dog: 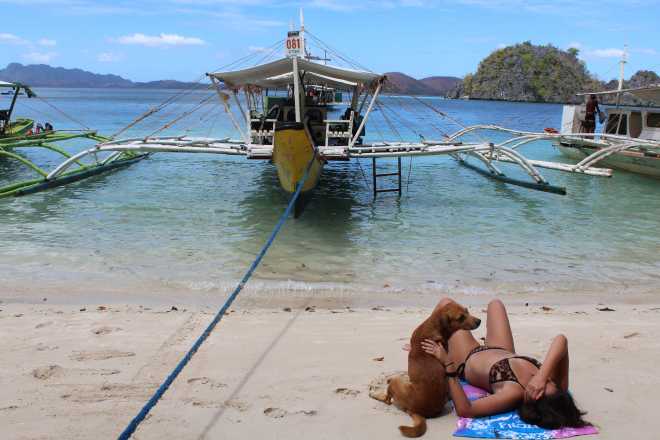 And some fantastic island jamming by the same two apparently ridiculously talented tour guides (this video is 2 minutes long, but it was one of my FAVORITE moments out of our entire month in the Philippines, so please watch the whole thing… I promise, you’ll enjoy it as well :)):

Boats getting ready to take off. This kid wasn’t having it:

Went to a small snorkel spot off the shore, where, sadly, most of the coral was dead and Francy went to battle with the super territorial fish, yet again:

However, this snorkeling spot had GIANT clams that were just hanging out at the bottom of the water, like it’s no big deal that they are giant clams: 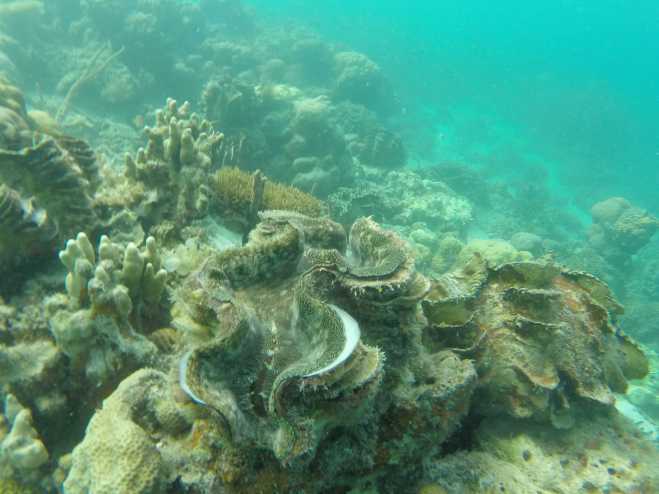 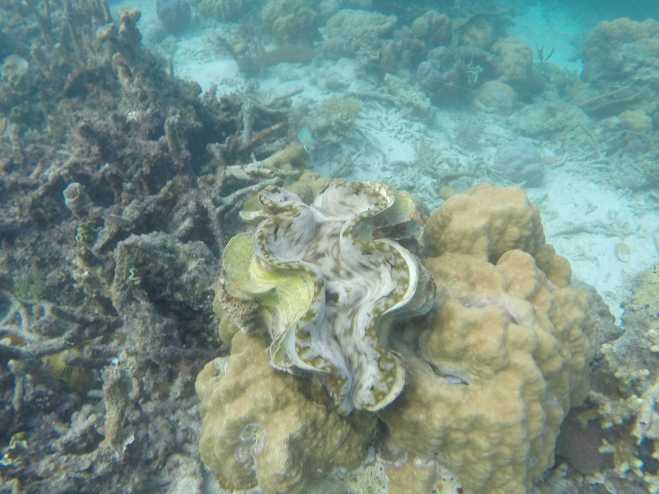 We were then supposed to visit a few more snorkeling spots and beaches, but as soon as we left the cove, we were hit by insane winds and the banca’s cover actually got torn off! It was wild! Fortunately, we were still able to go visit Kayangan Lake because it sits in a quiet cove that’s protected from the wind, so it’s still safe to dock. REALLY glad it worked out, as Kayangan lake was simply spectacular. It’s a brackish water lake, meaning it is a mixture of seawater and fresh water, which feels as interesting as it sounds. It screws your natural buoyancy instincts up and just feels different to the touch, which is a bizarre way to describe water, I suppose. It was quite an interesting experience! AND you had to hike up and down through a pass of sorts to make it to the lake. You had to earn its glory, if you will, and which we did: 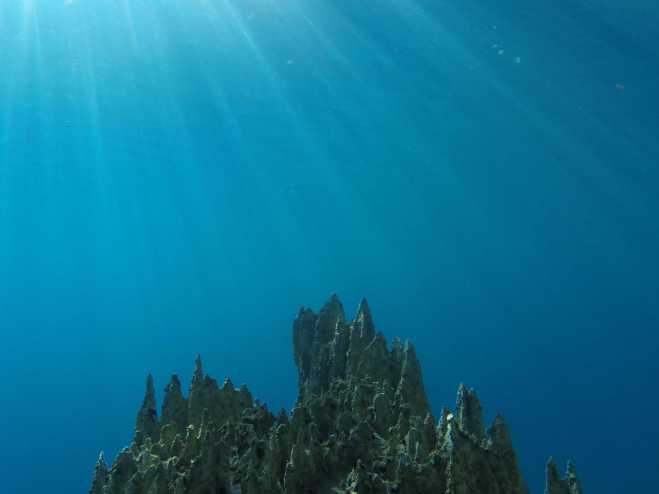 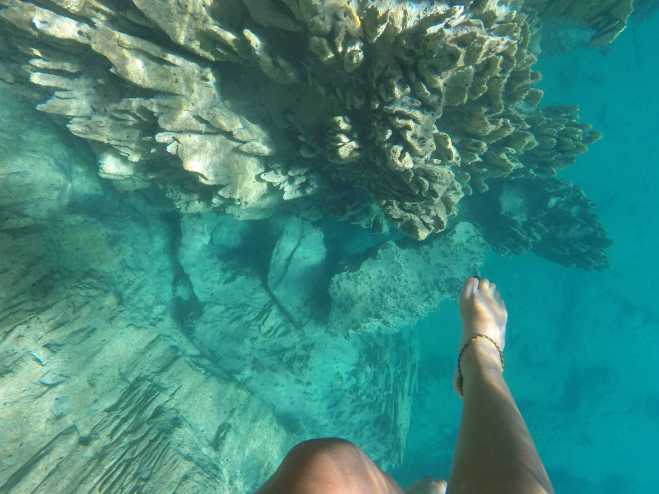 And Francy even did a mini cliff-jump!

Turns out, our tour guide is an O-bubble making expert:

Hiked back up and got a great glimpse of the protective cove, housing all the bancas seeking asylum from the wind:

Hopped into a cool little beach bar when we got back to Coron Town, deciding that we deserved a nice, cold beer after an extremely difficult and trying day (*sarcasm…*). Little did we know that we would be presented with… Franzia… IN A BOTTLE?!? For those who don’t know, Franzia a popular cheap BOXED-wine brand that we used to drink quite a bit in the states, cus we’re super classy people.

On September 24th, 1944, the U.S. Navy sent a fleet of dive bombers to the Coron Bay, where 24 Japanese war ships were stationed, attempting to reinforce the Japanese’s occupation of the Philippines. Within 15 minutes, the U.S. navy had attacked the entire fleet, leaving Coron Bay in flames. Today, at least half a dozen shipwrecks lie at the bottom of the bay, home to many beautiful corals and fish, earning the Coron Wrecks the title of one of the top shipwreck dive sites in the world. After shopping around a bit, we came across a dive shop called “Fun & Sun Dive Center”. We really liked the girls running the shop and our spidey senses told us that this was the one, so we signed up with them. Turns out, the girls (Maxine and Bertha) are two Afrikaners who grew up right next door to Francy in South Africa! In fact, Bertha’s brother went to the same school that Francy went to. Small world, huh? This is especially special (I know, I know) in that South Africans, especially Afrikaners, barely travel. We’re used to meeting at least one Israeli every single day (which has pretty much forced Francy to practice his Hebrew), but Afrikaners? Never. Now it was MY turn to practice my Afrikaans!

Taking off for a glorious day of shipwreck diving:

Sticking true to Francy form, here’s another epic diving video he put together. In case you’re wondering, the song choice was 100% him:

In addition to the unbelievable wreckage, we saw some amazing fish and corals: 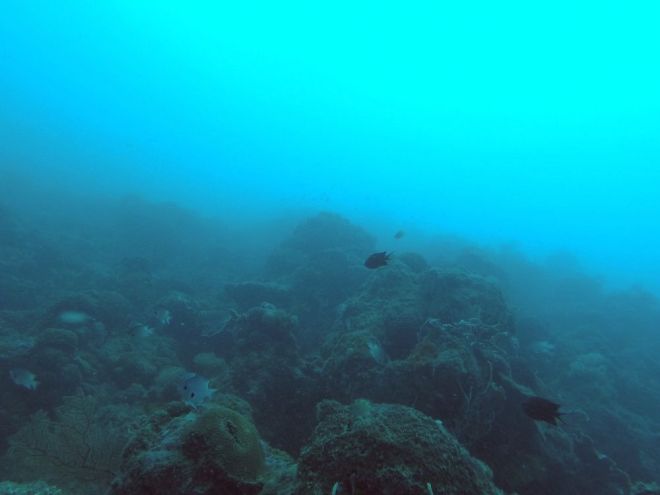 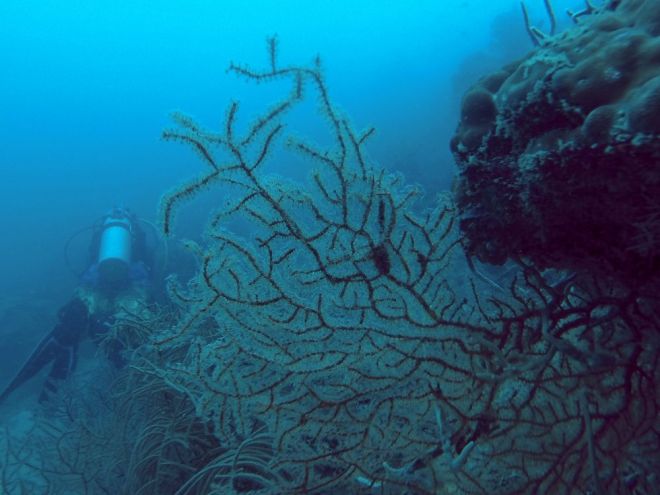 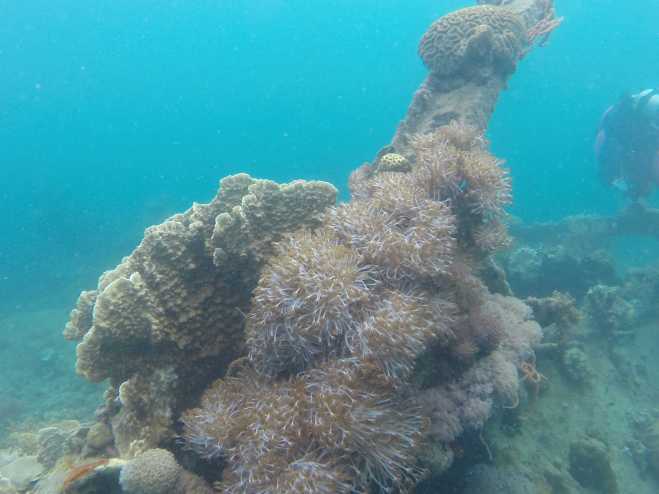 And even some turtles!! 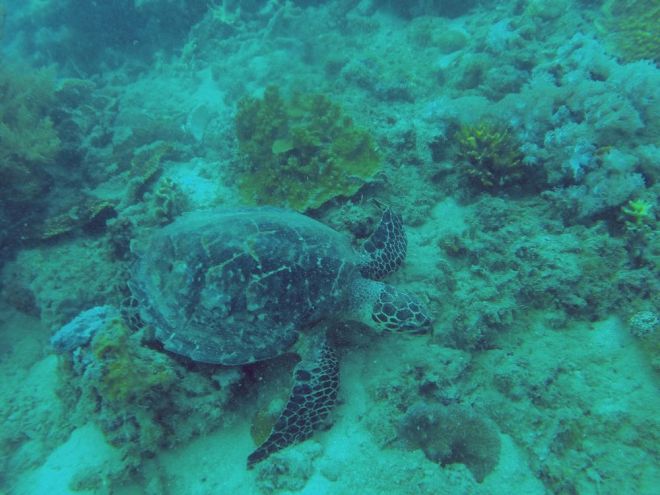 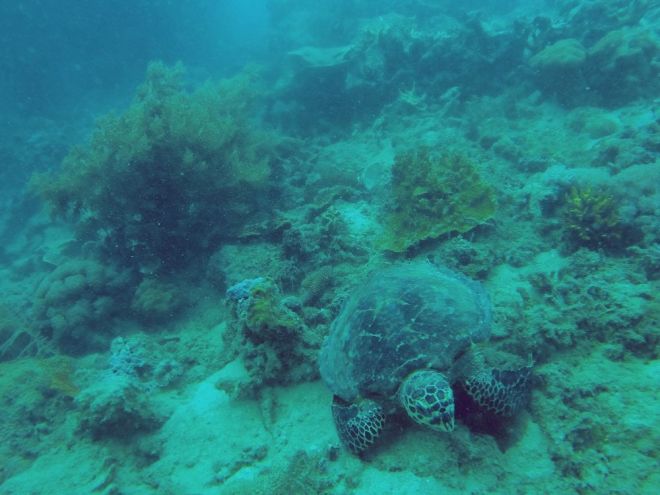 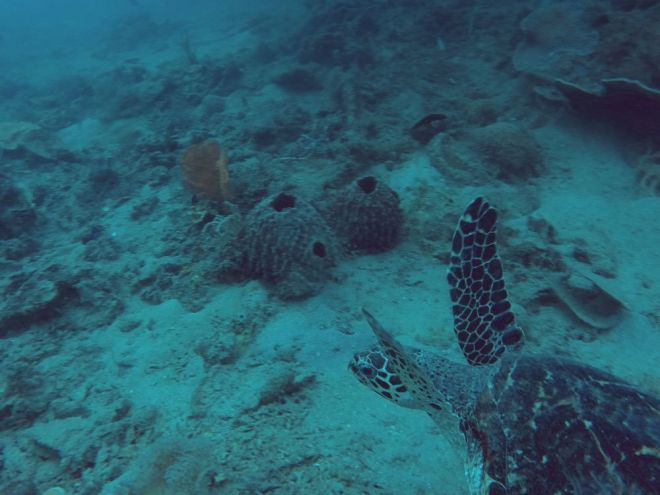 As you already know, Francy has a knack for attracting the aggressive, territorial fish:

Bertha teaching us how to make O-bubbles during our safety stop: 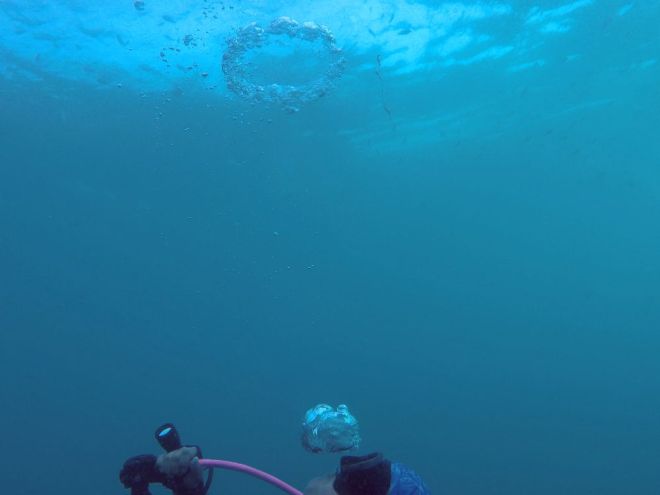 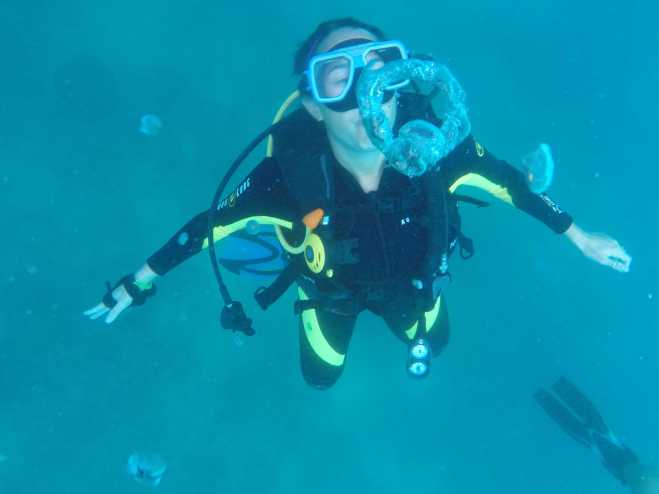 Making our way back to Coron Town, watching the sun set over the beautiful waters and mountains: 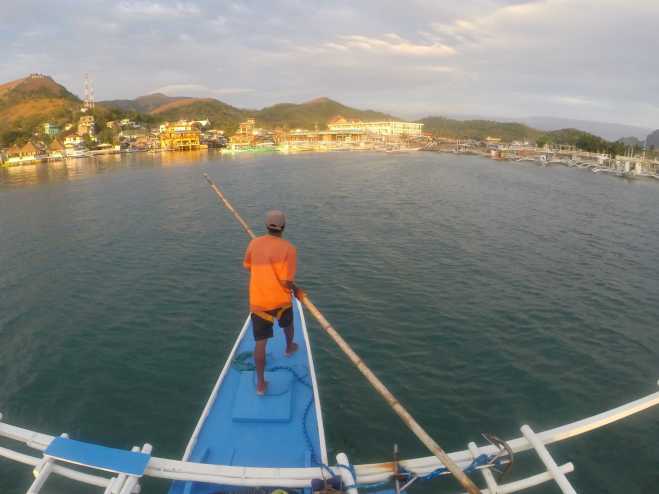 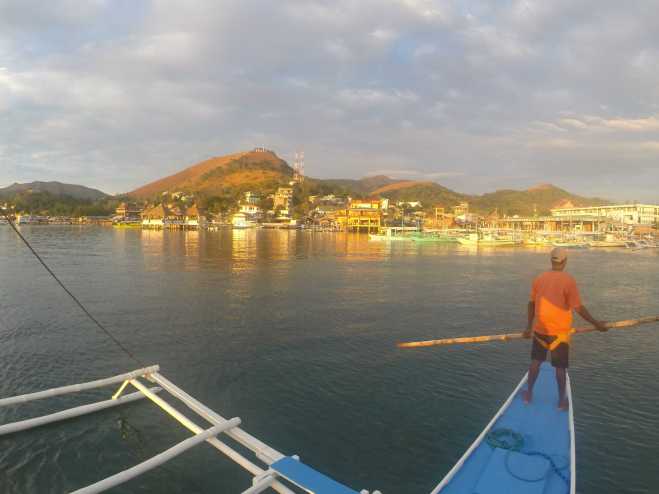 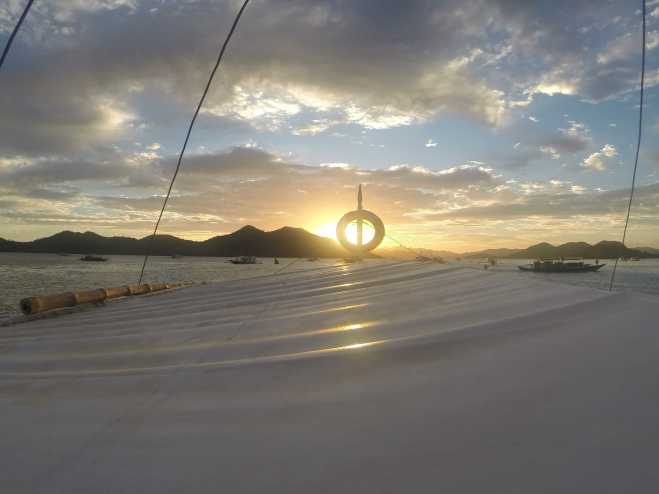 As Maxine and Bertha already had a recommendation sign in Hebrew, we thought we’d add to the mix with a bit of Afrikaans as well, just in case any adventurous Afrikaners like Francy happen to swing by in the future 😉

Maxine and Bertha – it was absolutely fantastic meeting you guys. We had an incredible day of diving and getting to know you both. Truly hope to get a chance to meet up again sometime in the near future!

Ferry from Coron to Manila

As we, unfortunately, had to get back to Manila (yuck) to fly out of the Philippines on the 30th, our smartest move was to take the overnight ferry – much cheaper and much more enjoyable than a flight! Francy partook in a basketball match while waiting for the ferry:

Samsonite making himself nice and cozy on his bunk: 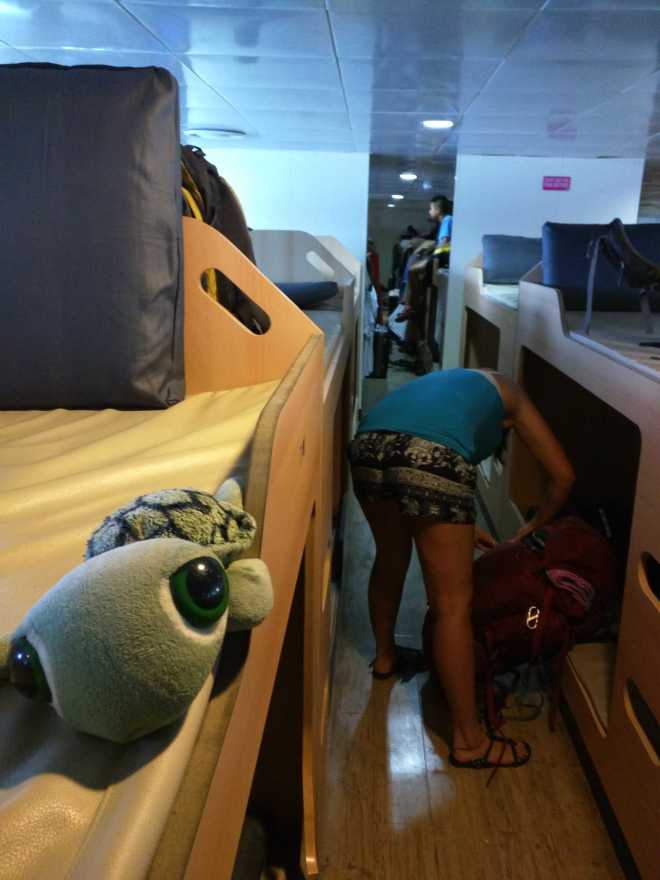 We ended up meeting some awesome people on the ferry, notably a German kid named Alex, whom we ended up spending the entire night with, drinking beer and listening to live music. We then ended up hanging in Manila the next night, going to the “lively” night-life street of Makati (which, frankly, was disgusting as well). Alex – I can’t believe we completely forgot to get a picture of the three of us, but we had a blast with you and can’t wait to see you again, either in Germany, Israel or California! Anyway, I’ll leave you with a picture of our Ferry: 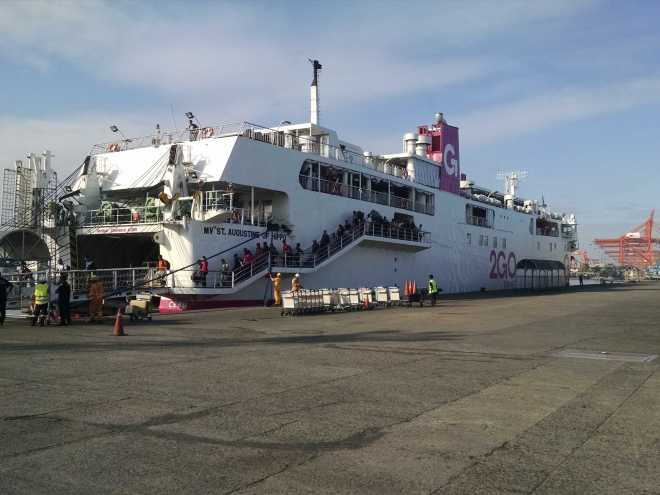 Philippines – you really were such a mixed bag of emotions for us. Your cities are disgusting and your food isn’t that great and you’re not that cheap or easy to get around, but my-oh-my are you beautiful. And your islands? The incredible waters, rocks, nature, and diving we experienced? And the glorious and fabulous people that inhabit your islands? We probably met some of the most amazing people we’ve met on our travels during our month hanging out in your country. These are things we will never forget. Good and bad – thank you for such a memorable month. We may or may not be back, though 😉