Sadly parted ways with Tokyo, but were excited as more of Japan awaits! Spent a day in Kamakura, walking around, seeing the temples and shrines, accidentally going on hikes through the wilderness, etc. Eventually continued southeast to spend the night in Hakone, an adorable little resort town built on volcanically active land and thus known for its onsens (Japanese hot springs). Spent a short night there before continuing on to Kyoto!

Kamakura is a small little town southwest of Tokyo, built among ancient Buddhist temples and Shinto shrines. Since there are too many to possibly visit in one day (and they each cost at least $3/person), we picked a few favorites and began making our way through the village, starting with Engaku-ji, “one of the most important Zen Buddhist temple complexes in Japan”: 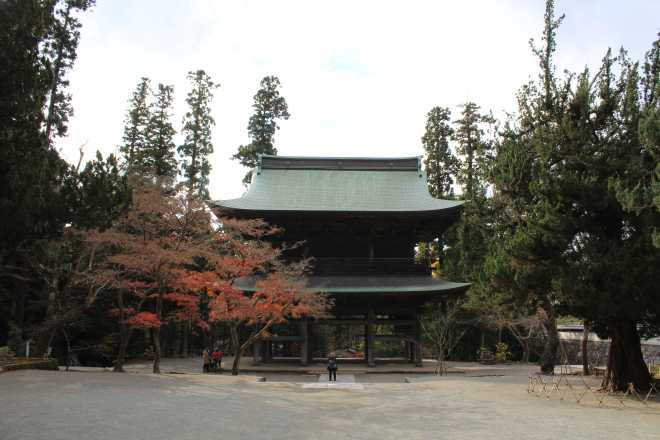 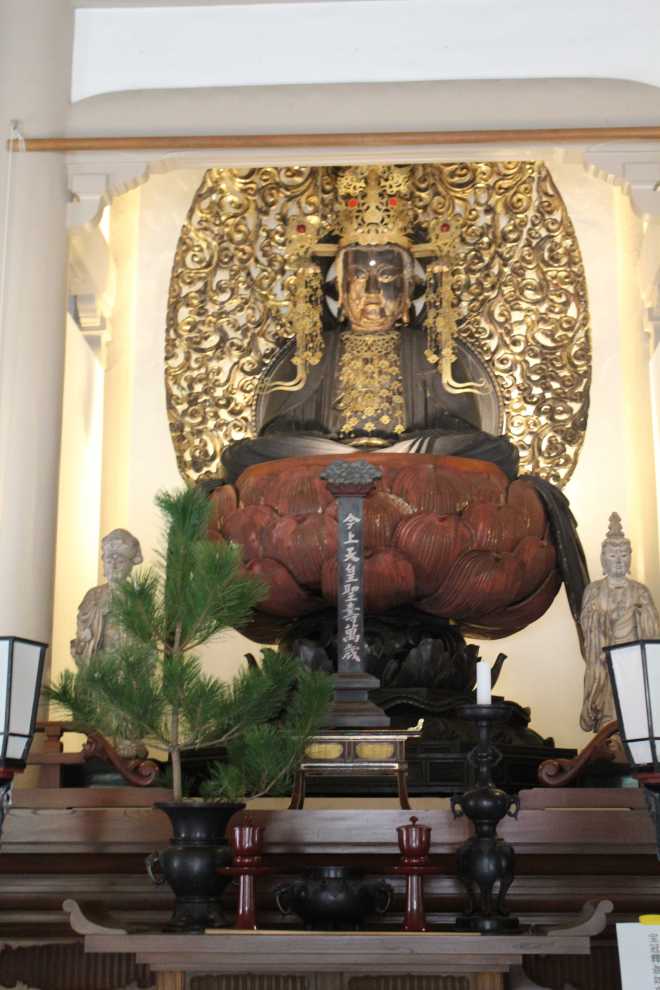 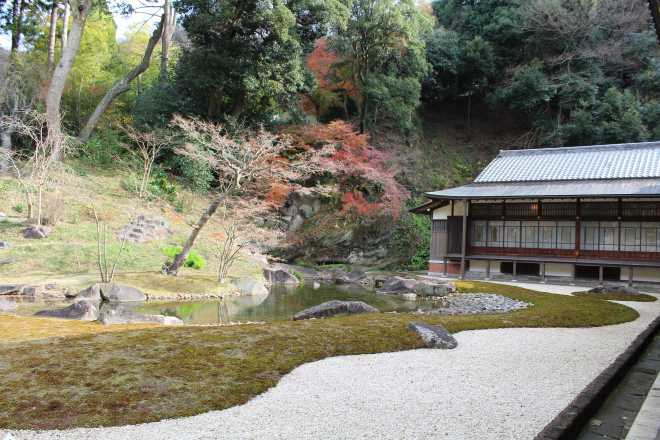 The beautiful Japanese gardens of the complex:

A woman kneeling as the monk (not seen in the picture) leads her in prayer (this is one of my favorite photos):

We then made our way over to Kencho-ji, a Rinzai Zen temple and the oldest Zen training monastery in Japan. We didn’t actually go inside, but just managed to capture a few shots of the beautiful garden from the outside: 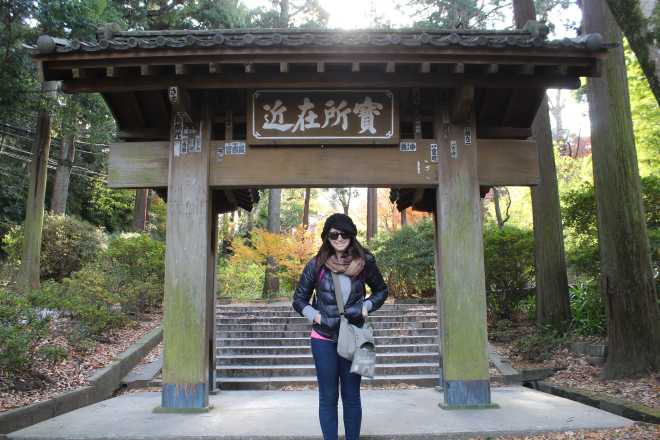 Our next destination was the Zeniarai Benzaiten Ugafuku Shrine (the money washing shrine), which was sort of on the other side of town. Instead of walking down to the main road to cross the train tracks and come up again, we thought we could take a short cut through the mountains. Turns out, you can, but you are full-on hiking through the woods. And we were not exactly dressed/equipped for this. Nor was the signage helpful in any way whatsoever (it’s like we were back in the Kathmandu Valley all over again!):

But we made it out of the woods alive and onto a road. Phew. Apparently, Francy makes an excellent purse porter: 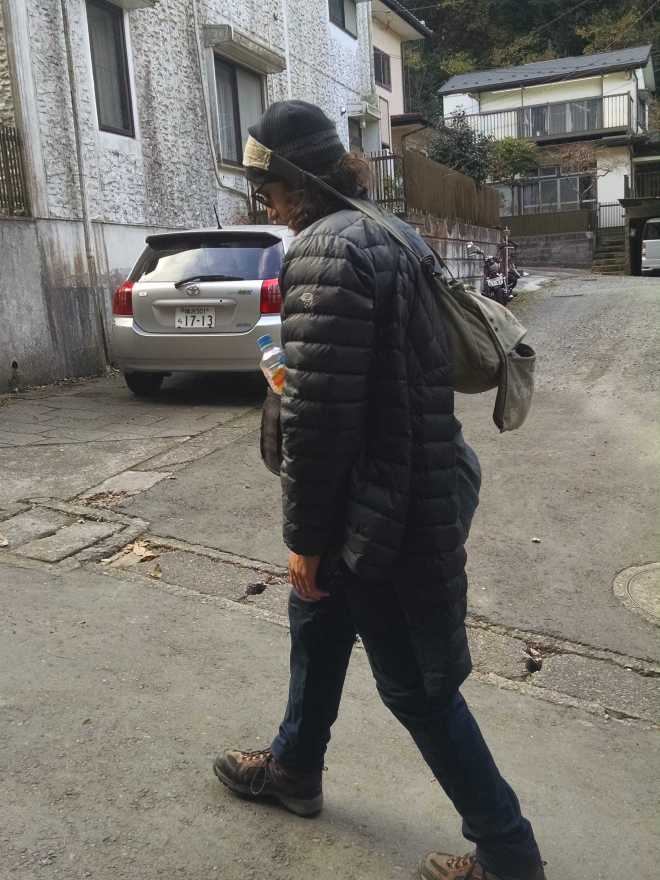 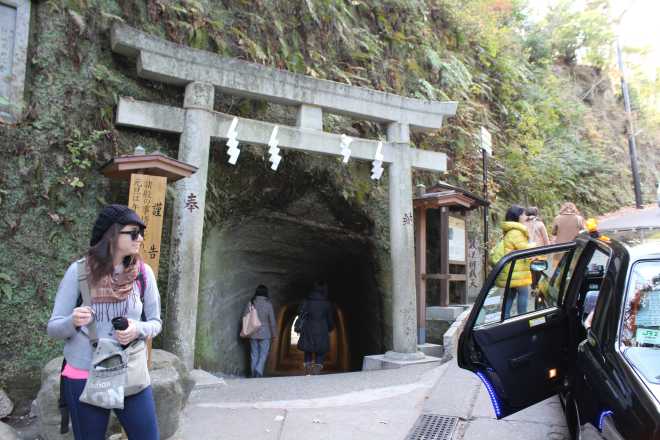 It is said that if you wash your money with the water from this spring inside this cave, your money will multiply. We figured we’d give it a go, as we’ve been pretty much income-less for the past 9 months: 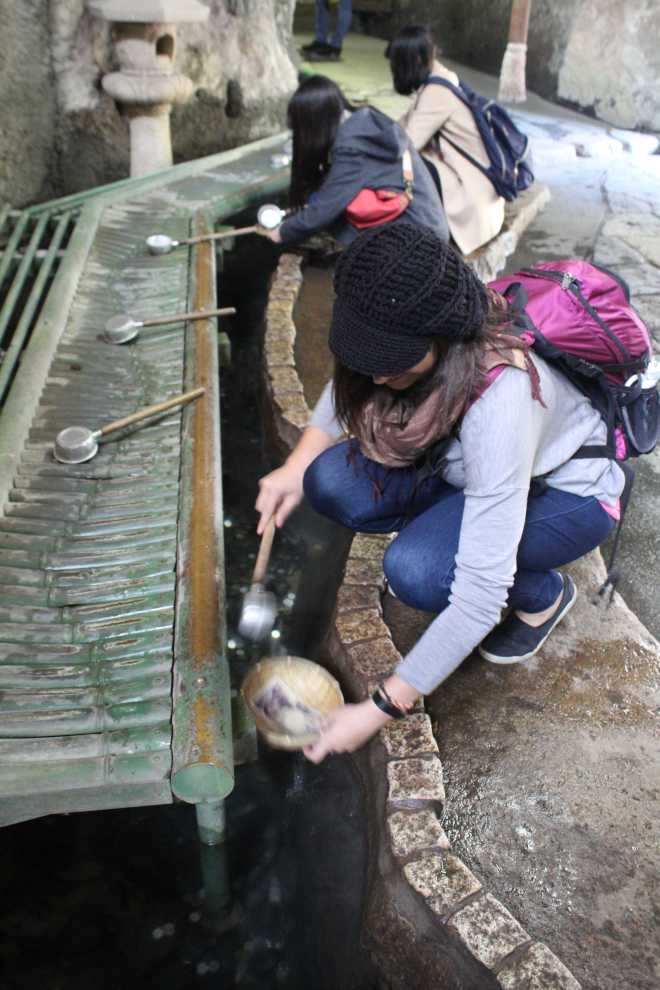 Waiting for the money to dry and multiply. 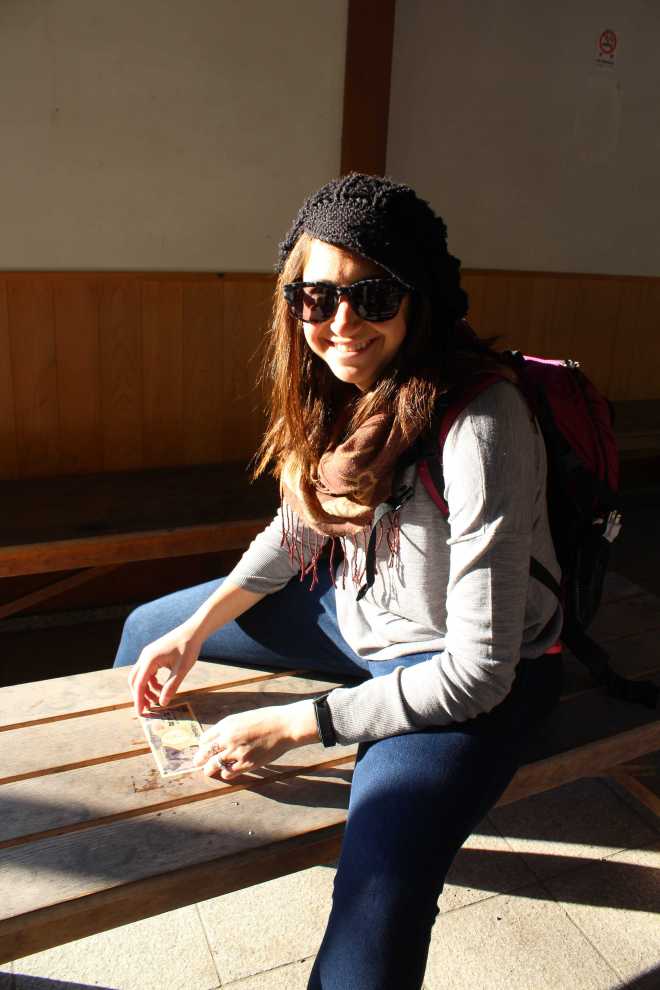 As of today (January 31st, 2016), as I sit here writing this post over a month post money-washing, no form of multiplication has occurred. In fact, just the opposite, as the Philippines really killed our budget! But I digress.

Back to Kamakura – while we began the eternal money-multiplication wait, we continued on to visit Tsurugaoka Hachimangū, the most important Shinto shrine in Kamakura (read more by clicking on the link): 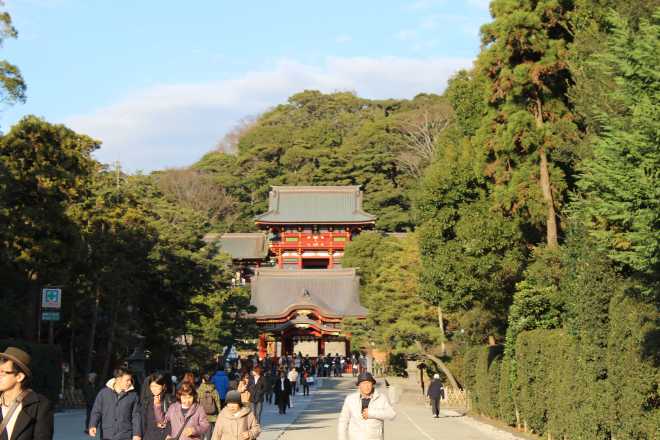 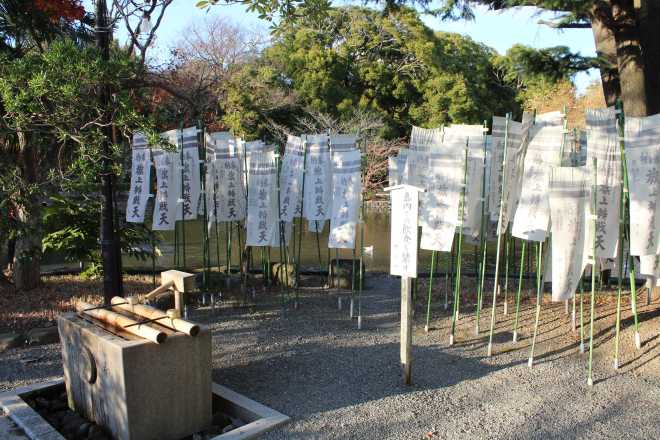 And of course, Samsonite made another friend: 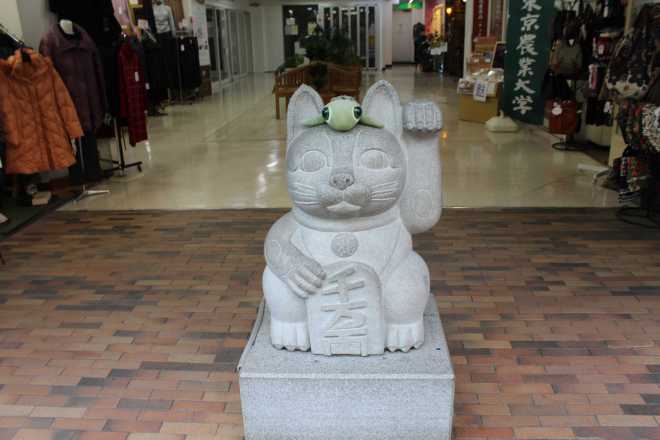 Before heading on to Hakone, we wanted to check out the Kamakura bay, which had been hyped up as a beautiful beach and tourist area. We arrived just in time for the sunset and realized that the hype was 100% legitimate:

These school boys frolicking in the water definitely thought so too: 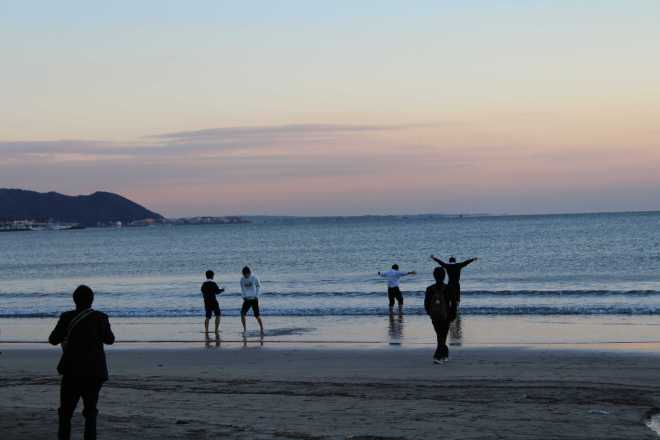 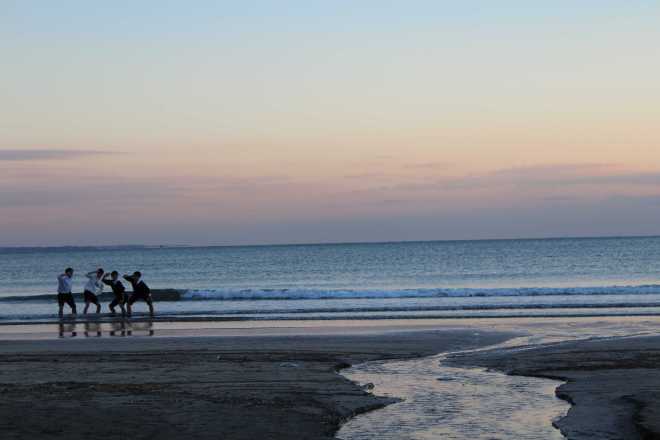 And so did this group of awesome hippies:

After an entire day of walking, we finally hopped on the train for Hakone. We were pretty pooped, but not as pooped as these kids: 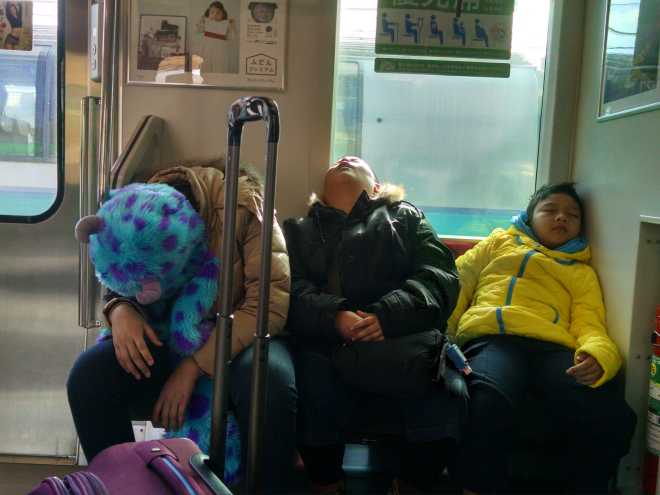 Arrived in Hakone after sunset (obviously), so didn’t really manage to capture any photos that night and then completely forgot to take any photos the next day (I know, terrible tourists), so here’s all we’ve got:

And unfortunately (not really, actually), all we really did in Hakone was go to an onsen, which can’t exactly be captured with photography. See, as I mentioned above, an onsen is a traditional Japanese hot spring. But it’s not JUST a hot spring. It’s an entire experience. With men and women separate, you enter and leave the onsen in nothing but your birthday suit. You leave all your belongings inside the locker room, walk into a shower room where you wash yourself off, and then walk outside (into the freezing cold!), where you are greeted by a selection of cascading hot spring baths, differing in temperatures by their proximity to the hot spring outlet, in a beautiful Japanese garden. It was definitely a bizarre experience at first, getting naked and then just roaming around from hot spring to hot spring with nothing but my hair clip. But, surprisingly, I got used to it very quickly and before I knew it, my hour was up and it was time to go meet Francy for dinner. Francy had a slightly different experience – as I was the only Western person there, I was on my own, among strangers, the entire time. Francy, however, made friends with two American guys straight off the bat. In his words: “It was my first time meeting someone naked and then later seeing them with their clothes on!” We both ended up enjoying the onsen immensely and for anyone who is on the fence about visiting one when in Japan – don’t be. It was one of the most wonderful experiences we had in Japan (and cheap!), especially after a busy and exhausting day of walking and sight-seeing.

After the onsen, we decided to call it an early night and head straight to our guest house to crash. Since most of Hakone is super pricey, we got lucky and found a relatively affordable guest house called GuestHouse Azito. This place was awesome! The staff and guests were all super cool and hanging out, and as much as we wanted to join, we were so exhausted, we just headed straight up to our room to sleep. The next morning, however, we had planned to do some sight-seeing (take the Hakone Komagatake Ropeway up to Mount Komagatake to try to get a glimpse of Mount Fuji, Japan’s highest mountain), but I wasn’t feeling all that great and it was raining out so we decided to spend the morning relaxing in the guest house. Ended up chatting with the owner, Yuta, and two of his employees – Nat from Thailand and Shiho from Japan. We were there until around 2 or 3pm just hanging out. Though we really didn’t do much that day, it turned out to be one of my favorite days in Japan! And GuestHouse Azito was easily one of the best places we stayed during our two weeks there. Super nice, clean, excellently located and topped off with an amazing staff (obviously). If you go to Hakone and are looking for an affordable and nice place to sleep, this is your spot! And don’t forget to leave your mark: 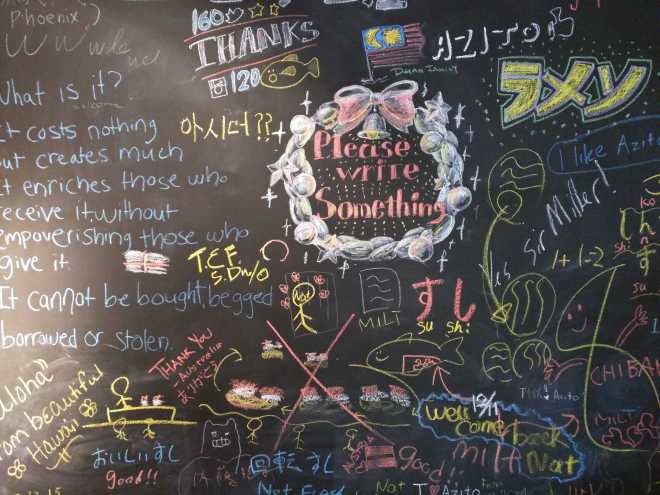 Thank you guys for an amazing stay!!! T&F from San Diego!