Said goodbye to Michael and Anne (SAD!) and made our way up to Taipei, Taiwan’s capital. Spent a solid 4 days in Taipei, remaining SOMEWHAT active… thing is, when you travel long term, sometimes you just need to have a day or two where you don’t leave the house and, in our case, do laundry and catch up on our blogging (and create our WordPress website!). Plus, it was pouring rain half the time we were there. However, we still managed to venture outdoors once or twice each day. I, personally, consider that a huge success.

But before I dive in to the photos from Taipei, I just want to refer you all to a blog post I came across titled “Taiwan the Underrated“. The author could not have written a better description of this country and its people. To summarize: Taiwan is the perfect blend of nature, mountains, lakes, beautiful beaches, cliffs and shores, culture, fun and bustling (but not too overwhelming) cities, markets and delicious food. Yet the country is not (yet) damaged by commercialism and jaded by over-tourism. In fact, it is actually completely underrated as a touristic destination. Ask anyone (I’m referring to our general peer group here) what they think or know about Taiwan and it is likely that all they’ll come up with is lists of technology products and goods that are “made in Taiwan” (I can’t believe there’s actually an entire Wikipedia page dedicated to that term…). But whatever, more Taiwan for us!! The novelty of us being the only Western faces never seemed to wear off – whether it was a kid stopping and staring at us at the flower festival and then asking his mom: “mom… are they foreigners?” or people asking to take pictures with us (a few times as part of a scavenger hunt, apparently), it was quite the experience. So much so, that we were actually disappointed when we (very rarely) saw fellow Westerners.

The key defining factor, however, that makes Taiwan particularly enchanting are the Taiwanese people (this, of course, is a generalization and, obviously, entirely subjective on our part). As a whole, the Taiwanese were some of the most kind, warm, generous and welcoming people we’ve ever met. Let me tell you about one particular incident that stands out and then we’ll continue with the post:

One day, on a local train making its way up the eastern seaboard, a man traveling with his wife and daughter suddenly knelt before us and held out a plastic bag. After staring at him puzzled for a few moments, he simply says “Soup. Pumpkin soup.” and hands us the bag, along with spoons and chopsticks. His wife then comes over and hands us napkins. We sat stunned, unbelieving that anyone could be this selflessly kind and generous. We tried to offer him money, but he refused, smiled and just kept saying “Eat! Eat!”. We happily ate the delicious soup, and when we were done, he came over and collected our bowls and threw them away, then returned to sit back with his wife and daughter. Just like that. Of course, we incessantly thanked them all and chatted with them for a bit, but as I type this story up, I still can’t believe it actually happened. That sort of thing has never happened to either of us in our lives and I can’t imagine it will happen again. So to the man and his family who gifted us with delicious pumpkin soup on the local train: Thank you for a TRULY once in a lifetime experience!

As we were now sans Mike and Anne, navigating Taiwan presented a wee bit of a challenge given that English was not as prevalent as one might expect (see below example of available signage). But that just made the adventure a million times more fun 🙂

The bus from Puli to Taipei was the most luxurious bus we had ever been on… I mean, just look at those seats! Even the girl behind Francy knows she’s riding in style.

We were tired and lazy getting in to Taipei, so we settled on visiting the nearby supermarket for some cup noodle for dinner (total step down from the luxury life we were living on the bus). If you know us, then you may or may not know how much we love snacking on sea weed and that we regularly have the Costco packs of sea snacks in our pantry. Well, we reached heaven… An entire AISLE of heaven!! 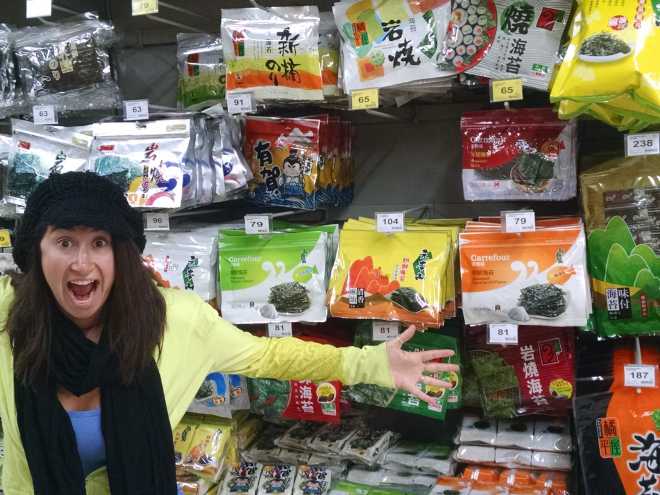 And then this… no offense Taiwan, but what the hell?!?! 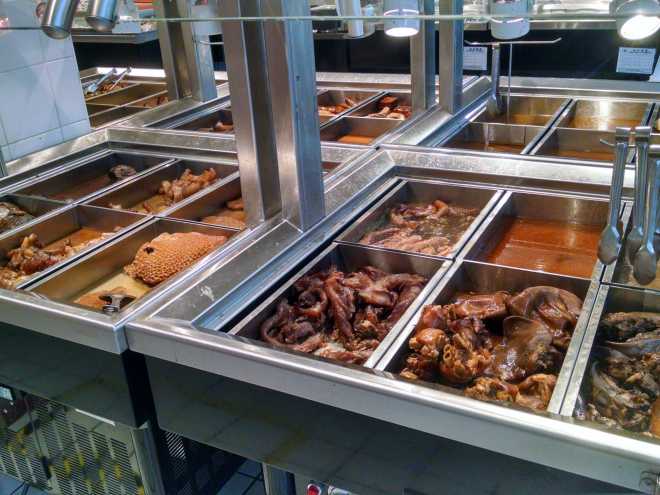 Next day, after deciphering the public laundry machines using Google Translate (seriously, how did people do this before technology?), we checked out the famous Shilin Night Market. This place was BANANAS! We saw all kinds of cool and crazy things. Such as people fishing (or rather, shrimping?) for their shrimp: 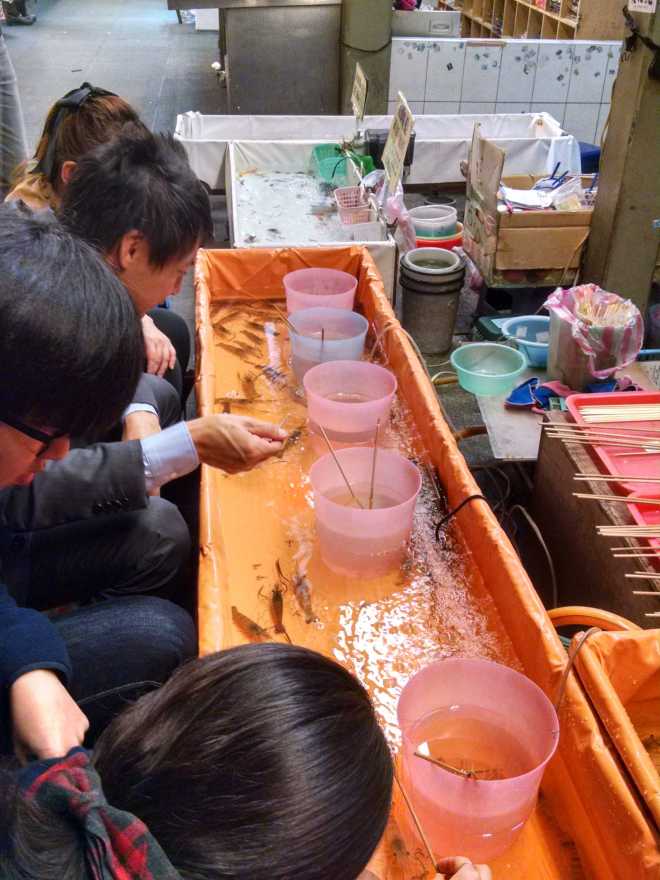 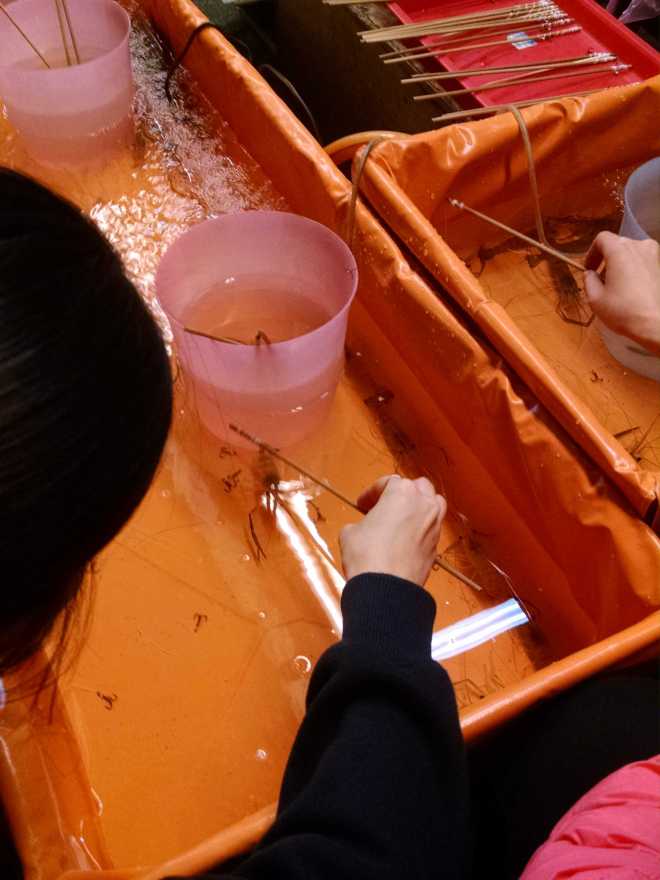 Taiwan as a nation rocks the highest number of scooters per capita. For a country with a population of 23.4 million (2014), there are at least 15 million scooters on the road, and that number is from 2011 (the most recent/only stat I could find), so I imagine the number is actually closer to 20 million. That’s almost 1 scooter per person (including infants, children and the elderly)! The country seems to be built around scooters. In fact, all the roads are very practically designed for scooters, with special dedicated scooter lanes (that sometimes actually split off from the street) and special scooter waiting areas at red lights (in front of the cars). The scooter culture there is actually quite fascinating. If you’re interested to learn more, you can read more about it here. This photo doesn’t even show a fraction of the number of scooters that lined the street:

Came across this auto shop while walking home to our Airbnb. Think someone should tell him? 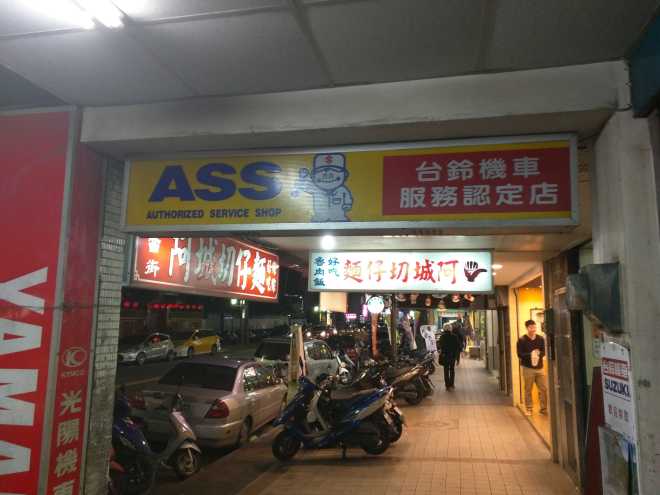 Took the metro the following day to say shalom to the Taipei 101 building – the former “World’s Tallest Building“, until that claim was taken away by Dubai’s Burj Khalifa in 2010: 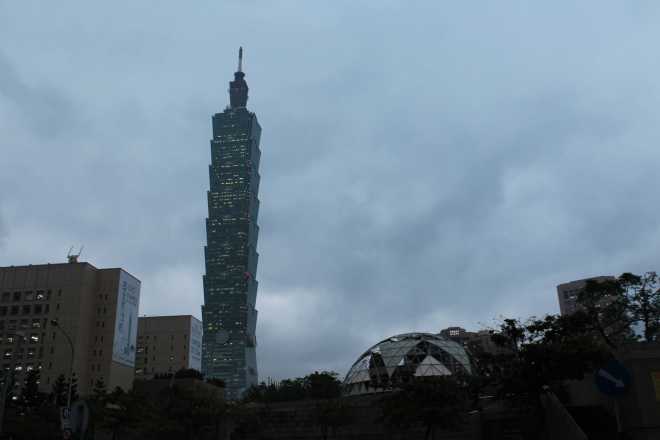 Wandered around the downtown area, Samsonite incessantly asking us to take pictures of him:

And then we saw a REAL-LIFE MINION!

Had some dim sum at the famous Tim Ho Wan (because we didn’t get a chance to go to the HQ in Hong Kong!). The chefs’ room (more commonly known as “kitchen”, I suppose) is surrounded by glass so you can watch them make the dim sum!

Took the metro home. Again, finishing off the evening with another interesting sign:

Woke up early the next morning and took off for a full and productive day of actual sight-seeing. On the way to Taipei Confucius Temple, Samsonite met the Three Wise Monkeys and, naturally, demanded to take a picture with them:

Channeling my Confucius as we get ready to enter the temple: 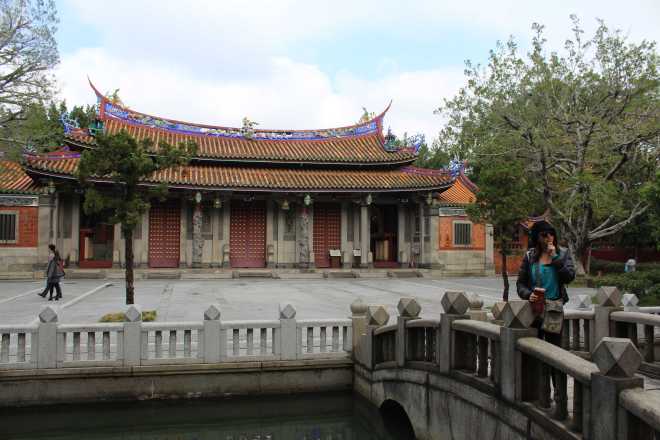 Ahh, what a beaut:

These dudes were channeling their Confucius by doing awesome martial arts in front of the temple! We creepily watched for a while:

Then paid a quick visit to the nearby and also beautiful Dalongdong Baoan Temple:

Where archaeologists (I think?) were hard at work!

Then made our way to Mengjia Longshan Temple. Beautiful ponds, fountains and waterfalls greeted us as we entered through the gate: 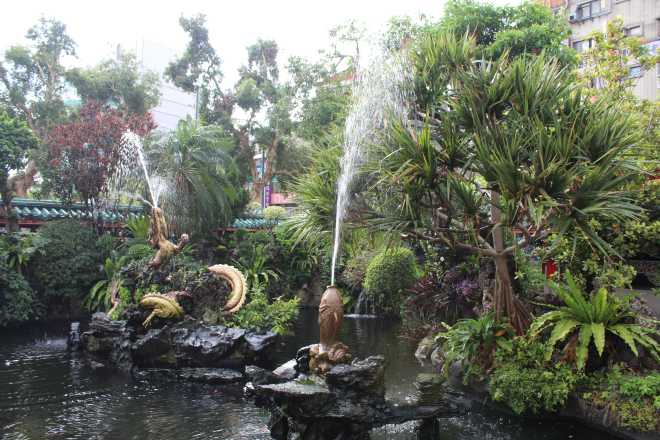 This is how Francy prepares before going into temples: 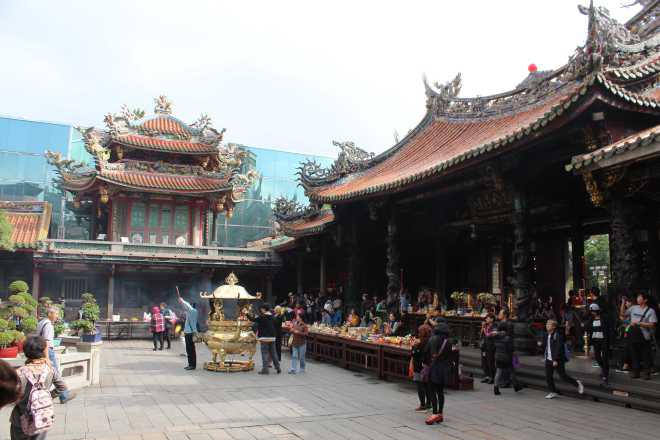 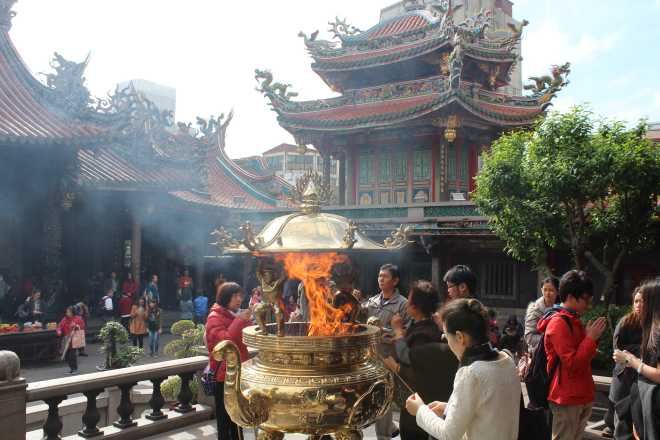 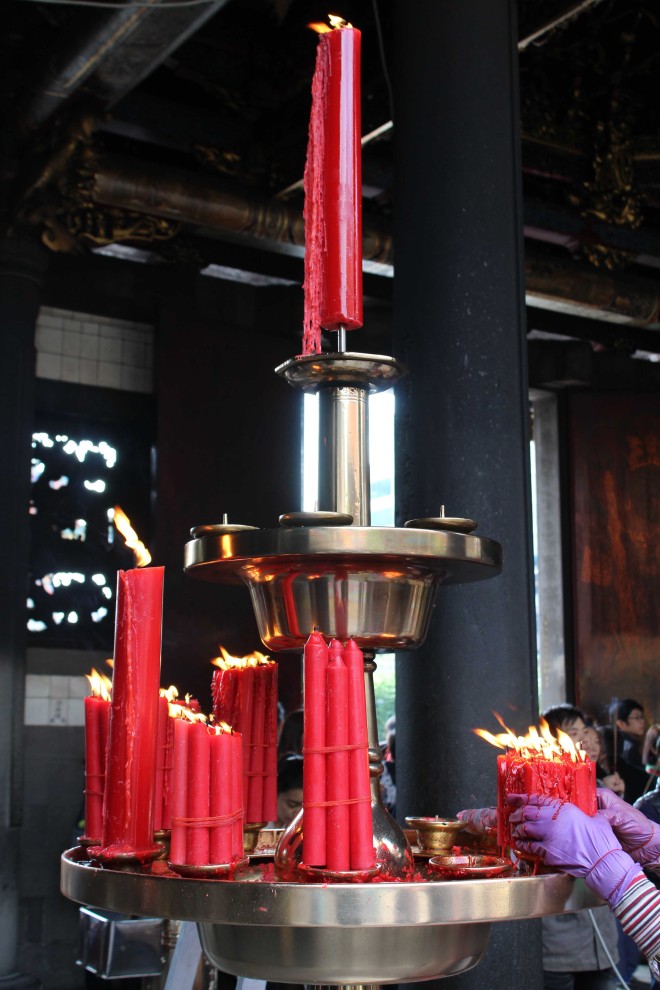 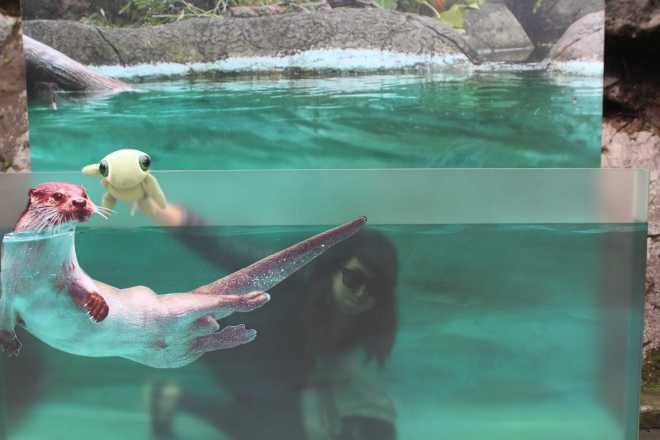 Where we saw ALL sorts of wild and fascinating animals, such as these hogs (or boars?) eating a piece of cloth: 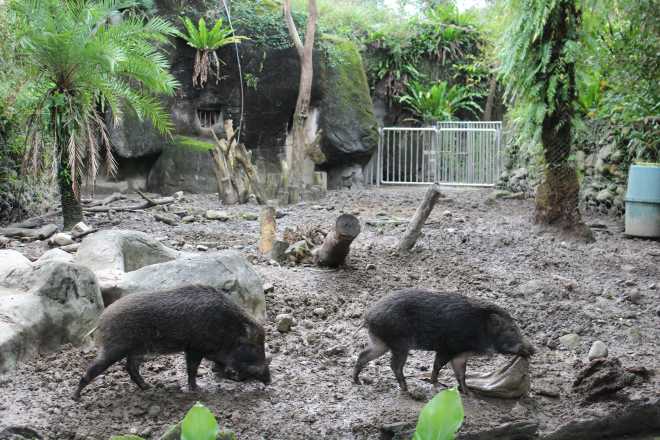 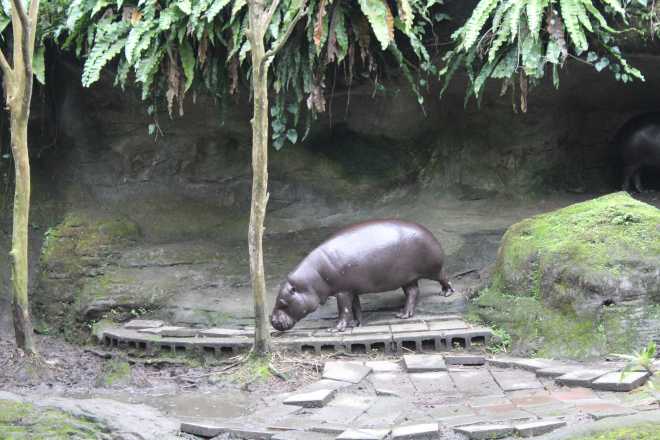 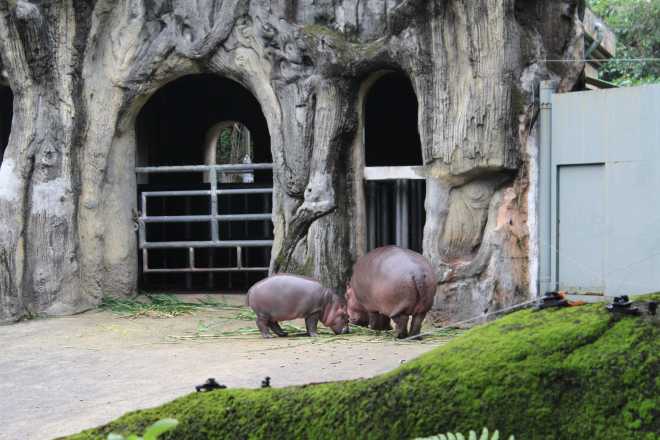 … making asses of themselves! (hah) 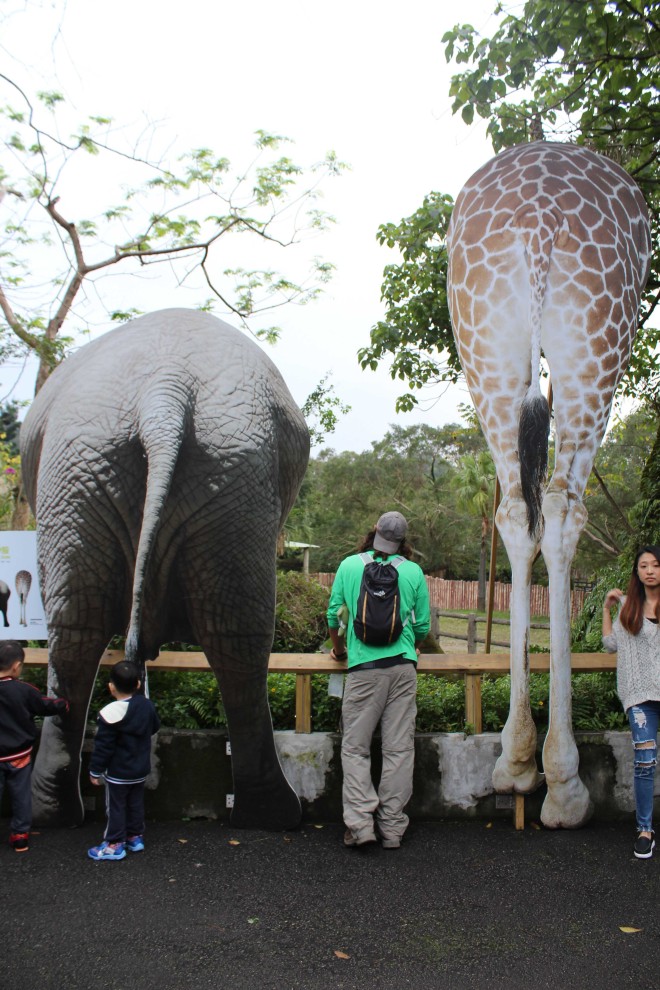 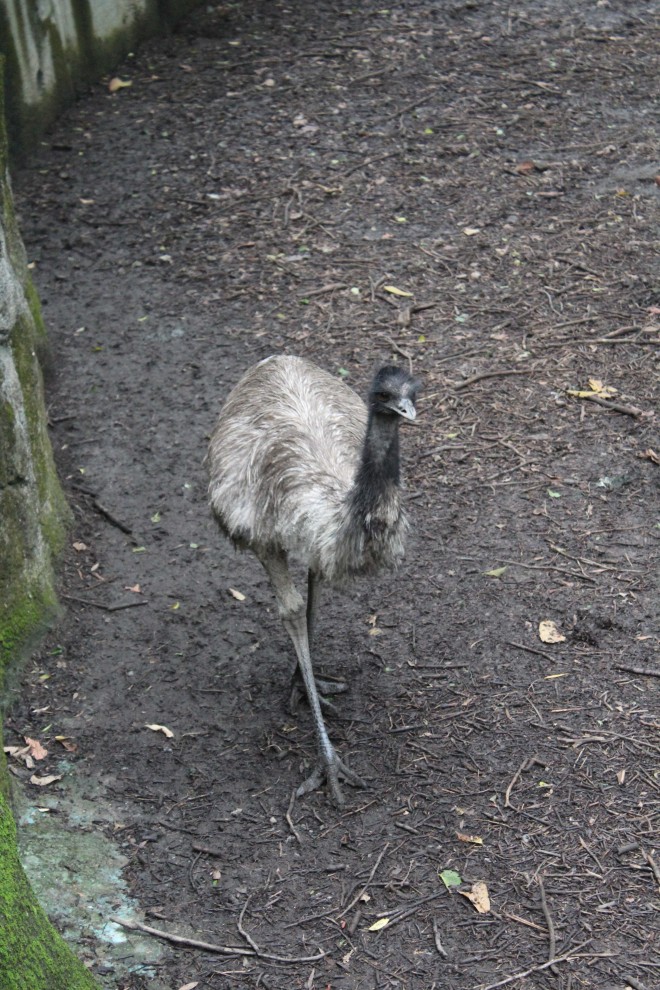 And wolves devouring their dinner:

And PANDAS!!! Laziest creatures ever. One was lying on its back, legs sprawled open. Even I thought the photo was too inappropriate to share. This one seemed alright (best I could do with the glare):

The likeliest of friends: 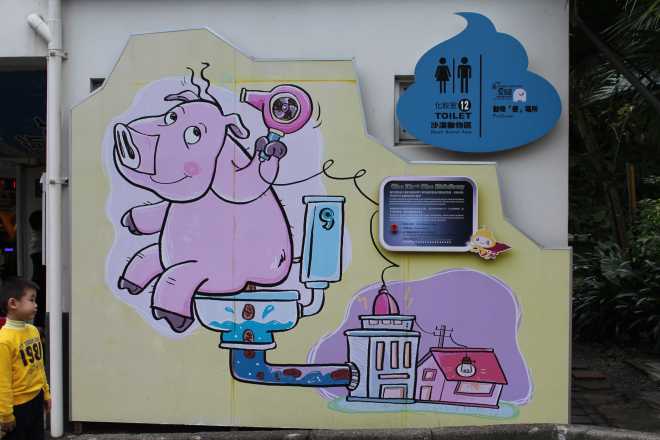 And a beautiful lily pond: 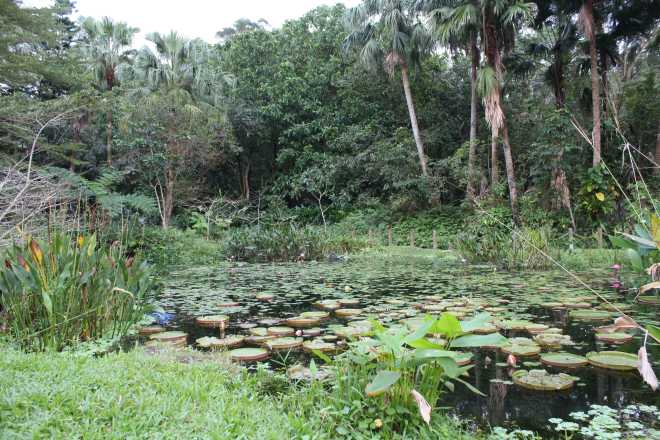 Saw some beautiful butterflies in the insectarium:

Including this beautiful butterfly:

Silly turtle… how did you get in there??

Finally, what Samsonite had been waiting for… reuniting with his brethren! 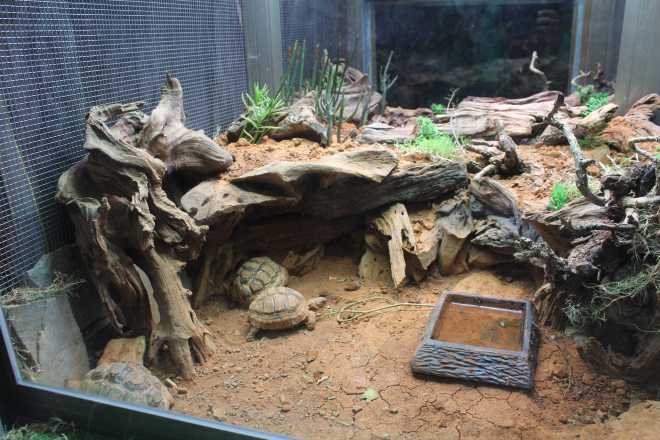 Such good times were had by all:

Samsonite had to overcome some serious obstacles on our way out of the zoo, such as this hippo almost eating him: 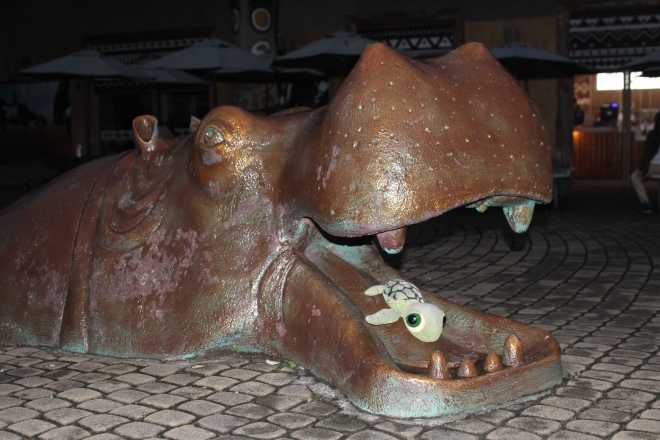 And this child almost stealing him: 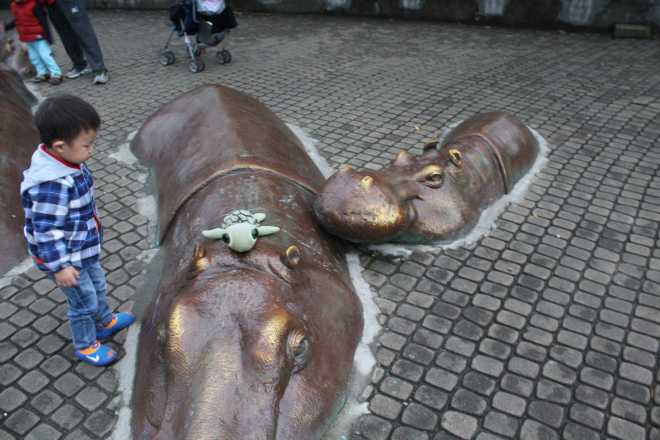 Capped off our fantastic and busy day by taking the Maokong Gondola up to Maokong, a town/area that used to be the biggest tea growing area in Taipei. They have a bunch of awesome little tea houses that offer amazing views of the city and, of course, delicious tea. Found a nice (and not outrageously expensive) tea house and drank some delicious tea while watching the city light up at twilight. A wonderful end to a great day! 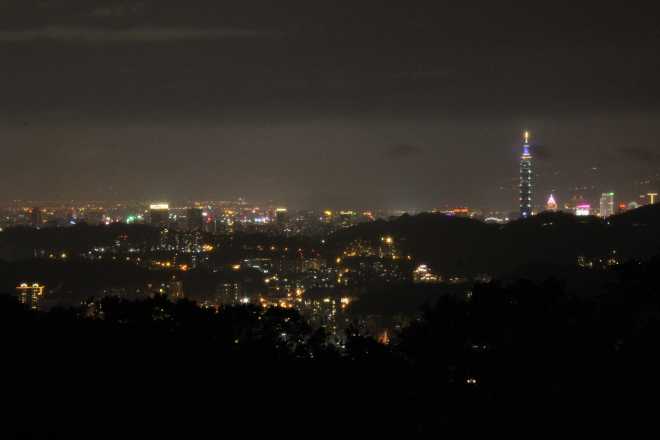